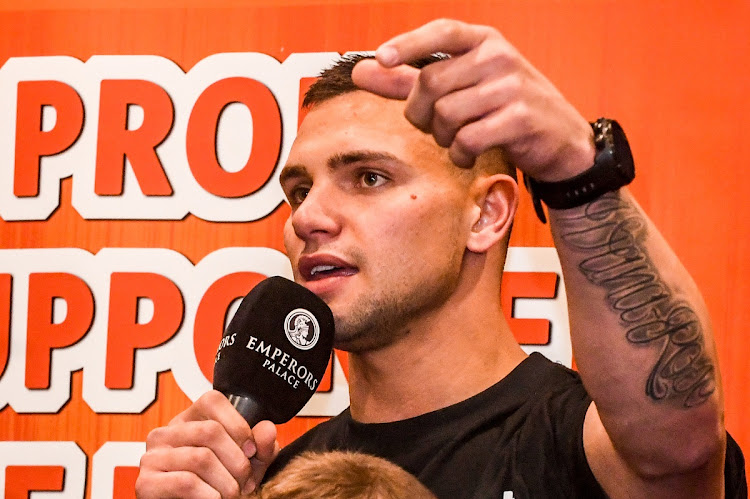 Kevin Lerena has been called various things in his boxing career‚ but being too young is not one of them.

The 27-year-old‚ who defends his IBO cruiserweight title against Germany-based Albanian veteran Sefer Seferi at Emperors Palace on Saturday night‚ came face to face with the 40-year-old challenger at a media conference on Tuesday.

One of Seferi’s entourage believed age was not on Lerena’s side.

Well‚ maybe if he was a giant tortoise‚ but as a boxer the South African is in his prime.

Lerena’s skills have been questioned over the years‚ largely because of his lack of amateur experience‚ but not his youth. “I’ve never been called young before‚” he said with a laugh.

He is predicting a tough fight until he works out Seferi’s style and knocks him out.

“No fight is an easy fight at the top‚” said Lerena. “It gets harder every fight because the expectation gets more. And that’s where Kevin Lerena rises to the occasion.

“I’m looking forward to a very tough fight against Sefer Seferi‚” he said. But it would take him a couple of minutes to suss him out.

“I’m going for the stoppage‚” added Lerena‚ who has 23 wins and a loss to his name.

Seferi has been stopped only once in his career of 23 victories‚ two defeats and a draw‚ a fourth-round stoppage at the hands of heavyweight star Tyson Fury.

Lerena reiterated the decision to turn down the IBF title eliminator for this fight was justified‚ saying he would earn more than double facing Seferi.

UK boxer was expected to cruise against his underdog challenger but was forced to battle through a bloody cut and a relentless opponent to maintain ...
Sport
1 year ago

How to get past the brick wall in your training

How to get past the brick wall in your training