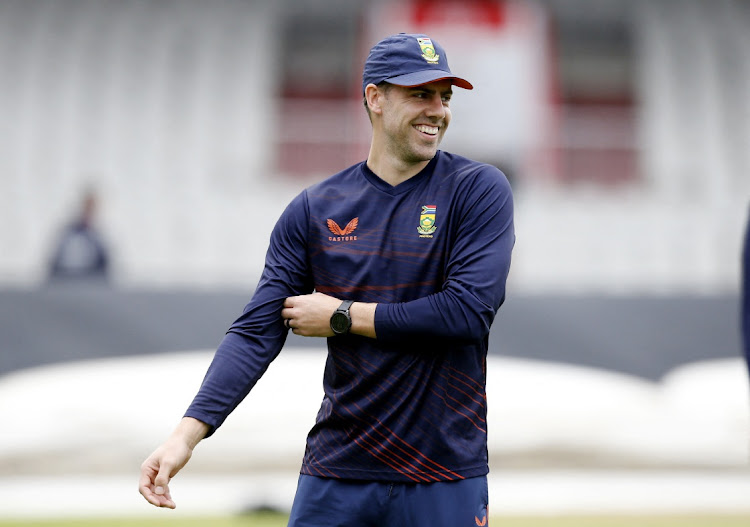 Proteas enforcer Anrich Nortjé is looking forward to another duel with the English batsmen as they head into the second one-day international in Manchester on Friday.

Coming off a comfortable 62-run victory in their opening encounter of the series against England at Chester-le-Street, Durham, aggressive fast bowler Nortjé will be itching to put the opposing batters to the sword and continue his wicket-taking exploits.

The Kariega-born quick was the standout performer with the ball in the first match, grabbing four wickets for 53 runs from 8.5 overs as they bundled the hosts out for 271 in pursuit of 334 to win.

Nortjé hopes to see a bit more pace and bounce in the Old Trafford pitch which he believes will aid an exciting contest between bat and ball.

“From what I understand, it might play a little better than the previous venue. Hopefully we will get a bit more bounce.

“Assessing it as soon as possible, even if we bowl first, will also be quite crucial, so hopefully there will be a bit more in it and that can possibly make it a good pitch for batters and bowlers,” he said.

On his first tour of the UK, Nortjé said his main objective is to ensure that he hits the right areas with consistency.

“You see a lot on television and get an idea of what to expect. But getting here and playing against England is a good test. For me, it is just about hitting my lines and lengths,” said Nortjé, who  missed series against Bangladesh and India due to a hip injury earlier in 2022.

“That might be different for Lungi [Ngidi] and anyone else. I am just trying to stick to my strengths. I have done things while back home, to get more rhythm and get used to the bowling action again.

“Especially bowling 10 overs in a game, which is a bit more than bowling two overs up front and then returning for two overs of change-ups and Yorkers,” he said.

Playing at Old Trafford, where the team batting first has won eight of the last 10 ODI matches, Nortjé believes they are well equipped to deal with any situation thrown at them by the English.

“We’ve just arrived here so we haven’t had a chance to properly assess the conditions, so we will look to adapt quickly. Our spinners have been crucial for us, they have done a really good job in the middle overs.

“So if we can all just contribute and do our own little bits, nothing fancy, then hopefully we can pull it through. It is just about us sticking to our basics.”

Meanwhile, all-rounder Andile Phehlukwayo will play no further part in the ODI series after a collision with captain Keshav Maharaj in the field. His head struck the latter’s shoulder, leading to a cut on the chin and concussion.

He was replaced in the game by Dwaine Pretorius, who was able to bowl as a concussion substitute but did not have much joy as he returned figures of 0/26 in three overs.

Phehlukwayo will now hope to be fit for the start of the three-match Twenty20 International series that begins on Wednesday. The last ODI will be played on  Sunday.