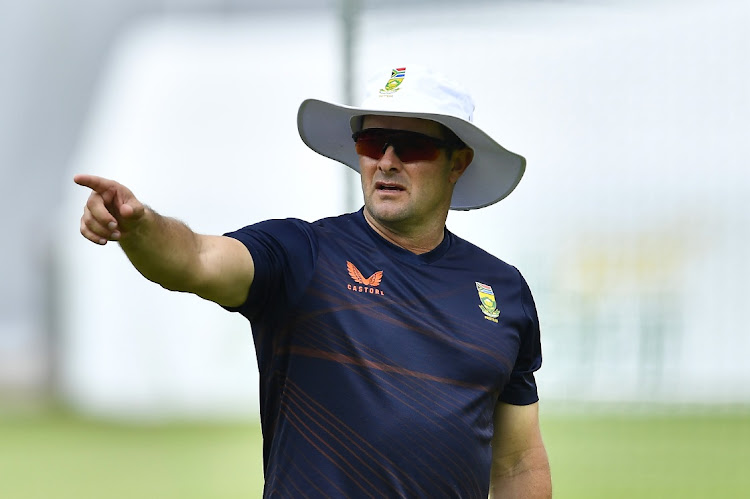 Proteas coach Mark Boucher says the make-up of the national team representing SA at the ICC T20 World Cup will be a little different from the present team.

The T20 World Cup is due to take place in Australia from October 16 with the final set for November 13.

Boucher was speaking to reporters on the arrival of the Proteas from their five-match T20 series in India that ended in a 2-2 draw.

The Proteas threw away a good chance of clinching the series. They were leading 2-0 before they let India bounce back before the final deciding clash that was washed out.

The series, in which the Proteas blew hot and cold, marked the start of preparations for the World Cup for Boucher’s men. The coach said it enabled them to try out a few things. But he pointed out that it was played in  conditions unlike those they will experience in Australia.

“If we look at our team and the make-up,  it would probably be a little different going into the World Cup, especially in completely different conditions,” Boucher said. “I think there’s a big confidence we can take forward, we tried a few things and asked a few questions, got a couple of answers about the possibilities we can have.

“But I guess once we start playing in conditions that are more similar to Australia we can start to delve into different tactics,” he said. “As coaches, we have started to think along those lines, but the players at the moment are just playing the series as it comes, and we will make adjustments according to the conditions that will suit the World Cup.”

The Proteas will still have a chance to test themselves against England and Ireland away from home before the World Cup.

They will play England in three ODIs and three T20s next month and two T20s against Ireland in August.

Boucher is happy with his squad’s depth, with several players such as Rilee Rossouw and enterprising youngster Dewald Brevis knocking on his door for a place in the team.

“The position we are in is good. There’s quite a lot of depth to choose from,” said Boucher. “We’ve got these players [Rossouw and Brevis] and their names have definitely come up in selection meetings, but I will leave Victor [Mpitsang, convener of selectors] to answer those questions because that’s his job.

“But certainly, it’s good when different names come up. It shows a bit of depth in our system, which is always good for players.

“Those names will certainly come into the mix. You want to have continuity going into the World Cup. That showed how valuable it was for the previous World Cup.”