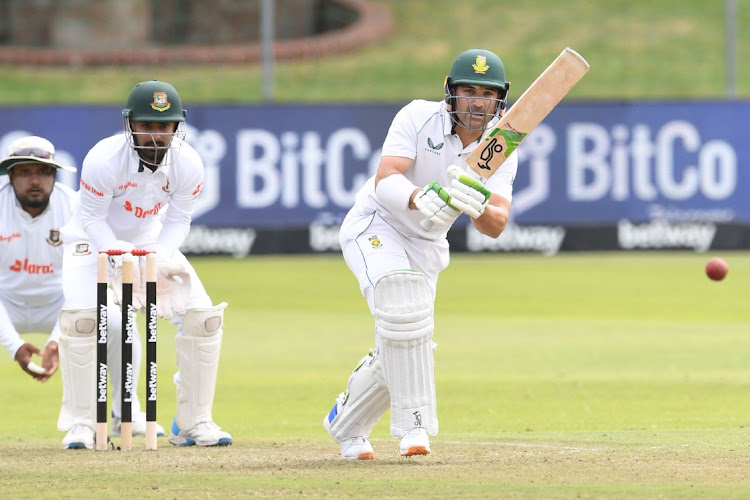 The Proteas took three wickets in the final session as they tightened their grip on the second Test against Bangladesh in Gqeberha on Sunday.

The hosts‚ who dismissed their opponents for 217 shortly after lunch‚ declared on 176/6‚ leaving Bangladesh with 412 to win in what would be a record-breaking run chase at St George’s Park. SA‚ who batted to a first innings 453‚ had wrapped up the tourists’ tail to limit them to 217 in the second session‚ a deficit of 236.

When stumps were drawn‚ captain Mominul Haque was not out on 5 off 22‚ while Mushfiqur Rahim was yet to face a delivery.

The hosts lost three wickets late on‚ when Mahmudul Hasan Joy (0 off 1) and Najmul Hossain Shanto (7 off 10) fell to the bowling of Keshav Maharaj inside the first five overs.

The Proteas went to tea on 84/2 with a lead of 320 after a 60-run opening stand between Dean Elgar and Sarel Erwee.

Captain Elgar (26 off 29) was bowled trying a reverse sweep before Keegan Petersen (14 off 25) was trapped leg before wicket‚ the review being upheld by umpire Allahudien Palekar‚ both wickets going to Islam.

Ryan Rickelton was next to go for 12‚ caught by Haque off Islam at short mid-on before Temba Bavuma (30 off 56) was trapped leg before wicket by Mehidy Hasan Miraz‚ his review turned down by Palekar‚ with SA on 154/5.

When Wiaan Mulder (6 off 15) fell‚ bowled by Miraz‚ SA declared.

When play resumed on Sunday morning‚ Bangladesh mounted a fightback as Yasir Ali and Mushfiqur Rahim produced a 70-run partnership after a light drizzle saw the start delayed by 20 minutes‚ before both lost their wickets in the first session.

Ali and Rahim got 111 together for their sixth-wicket partnership as they continued to frustrate the Proteas attack.

Spinners Harmer and Maharaj cleaned up the visitors’ tail‚ taking the final three wickets for seven runs in 17 minutes after lunch.

Harmer had Islam (5) and Ebadot Hossain (0) caught by Lizaad Williams either side of Maharaj’s dismissal of Miraz for 11.

Harmer and Mulder ended with figures of 3/39 and 3/25 respectively‚ while Olivier and Maharaj claimed two wickets apiece.