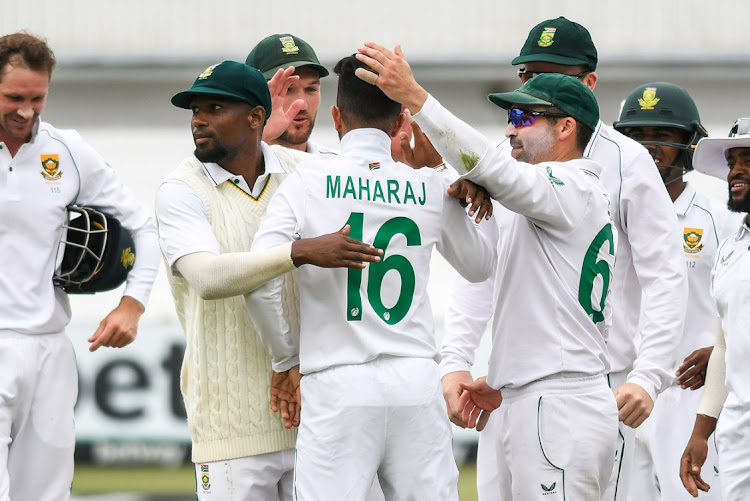 Keshav Maharaj of SA celebrates the wicket of Yasir Ali Chowdhury of Bangladesh on day five of the first Test at Kingsmead in Durban on April 4 2022. Picture: Darren Stewart/Gallo Images

Keshav Maharaj turned on the spin on day five of the first Test at Kingsmead in Durban as SA thrashed a hapless Bangladesh by 220 runs to take a 1-0 lead in the series on Monday.

This was player-of-the-match Maharaj’s second-best career figures since he claimed 9/21 against Sri Lanka in 2018.

All the wickets in the innings fell to spin bowlers for the first time since the Proteas’ readmission to international cricket. Maharaj was supported by Simon Harmer, who claimed the scalps of Shadman Islam, Najmul Hossain Shanto and Mehidy Hasan Miraz.

Day five started with Bangladesh on 11/3 and needing 263 runs to win, but this proved a mission impossible for the tourists as Maharaj and Harmer took full advantage on a pitch ripe for spin.

Bangladesh were bowled out for 53 as SA registered their third win in 11 matches since 2008 at the venue, while the visitors scored the lowest total by anyone at the ground.

It took SA less than an hour in the first session to bowl Bangladesh out in 42 balls and register a thumping win that will give them confidence going into the second and final Test at St George’s Park from Friday.

Though Maharaj and Harmer were impressive, Bangladesh were dreadful with the bat as they lasted just 19 overs and only two of their batters managed to get into double digits.

The first wicket to fall was experienced middle-order batter Mushfiqur Rahim, trapped in front by Maharaj at the start of a good day at the office for him.

Maharaj continued to wreak havoc as he claimed the wickets of Liton Das (2) and registered his fiver with the scalp of Yasir Ali (5).

Harmer joined the party by removing Mehidy Hasan Miraz as Bangladesh continued to collapse and SA tightened their grip.

In the first innings, Bangladesh won the toss and put SA in to bat. They posted 367 with Temba Bavuma scoring 93 as he fell for the second time in the 90s.

The other notable scorers were Dean Elgar (67), Sarel Erwee (41) and Harmer, while Khaled Ahmed was Bangladesh’s best bowler with four wickets, followed by Mehidy Hasan with three.

With bat in hand, little-known Bangladesh opener Mahmudul sparkled with a defiant 137 while wicketkeeper Liton Das was the other notable contributor with 41 as the visitors reached 298.

In SA’s second innings of 204, Elgar was the top scorer with 64. The rest of the batters failed to kick under pressure from Mehidy Hasan and Ebadot Hossain with three wickets apiece.

Bangladesh’s second innings made for sorry reading as Najmul Hossain Shanto was their only notable scorer with 26.

He became SA’s most successful spinner since the country’s readmission to the international arena in 1991, moving past Paul Adams’ previous best mark of 134 Test wickets to take his tally to 141.

“I’m actually quite emotional. I’m just glad I could take the team over the line today,” Maharaj said at the post-match presentation.

Cricketers were sometimes impatient people, he said, and “when you bowl long spells you want to get reward and it’s just about sticking to the processes. The hard work and toil from the first innings paid dividends in the second.”

Maharaj bowled in tandem with Harmer, who was playing his first Test in seven years after a spell in English county cricket with Essex. Harmer finished with match figures of 7/124.

It is unlikely the pair would have played together had SA not been without their entire front line pace attack, who are away at the Indian Premier League.

“Fortunately, I had Simon at the other end who provided control. We had a bit of a stop on the game, which allowed us to strike with our [attacking] fields,” Maharaj said.

“It’s been a long time since SA has played two spinners, so I’m glad there’s been a shift in mindset towards slow bowling in our country.

“I’m very pleased for Simon, he’s taken the opportunity with both hands. I know he’s gone overseas and came back. He’s a different player, his skills have gone up.”