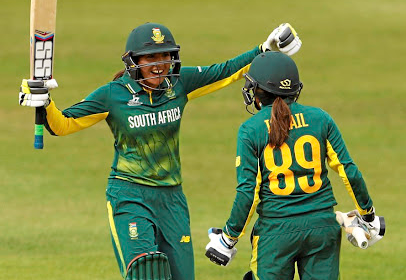 Suné Luus will captain the Momentum Proteas in the four-match ODI series against the touring West Indies in the absence of injured captain Dané van Niekerk, while off-spinner Raisibe Ntozakhe makes her return to the international stage.

SA will host all four matches in a biosecure environment (BSE) at the Wanderers, with the first ODI starting on Friday.

Van Niekerk is sidelined for a minimum of three months after she sustained a left ankle fracture earlier this month as a result of an accidental slip on a wet surface while at home.

Van Niekerk will not only miss the West Indies tour but has also been ruled out for the Women’s Cricket World Cup to be hosted by New Zealand from March 4 to April 3.

SA will also be without Lizelle Lee, the star batter who  on Monday was named as the ICC Women’s ODI Cricketer of the Year.

Lee misses out as she is still recovering from Covid-19.

Lee was a class act in the 50-over format in 2021 as she finished the year as the highest run-scorer with 632 runs in 11 matches at an average of 90.28, with one century and five half-centuries.

Wolvaardt was the second-highest run-scorer with 161 runs when the two teams last faced each other in Antigua and Barbuda in September 2021 with SA romping to a 4-1 series success, while experienced fast bowler Khaka’s six-wicket performance is still fresh in people’s minds.

The West Indies tour will mark the return of Ntozakhe.

The off-spinner was cleared to bowl again by the International Cricket Council (ICC) in September 2021, after she was suspended from bowling in international cricket in October 2018 due to a suspect action.

She suffered heartbreak as her suspension came a few hours after she was named in SA's squad for the T20 World Cup in Australia.

“It is also quite exciting to have Raisibe Ntozakhe back in the squad and for her to be playing international cricket again. It will be a great opportunity for her to revive her career,” said Du Preez.

“With the conditions up in Johannesburg, it will suit us to play against the West Indies. They are normally used to the slow, turning wickets and for now, it is a great opportunity to strike with our bowlers and to also have a balanced approach to those results.”

‘I may be many things, but I am not a cheat,’ says batsman who claims he was coerced
Sport
3 months ago

India take a beating but leave SA as champions