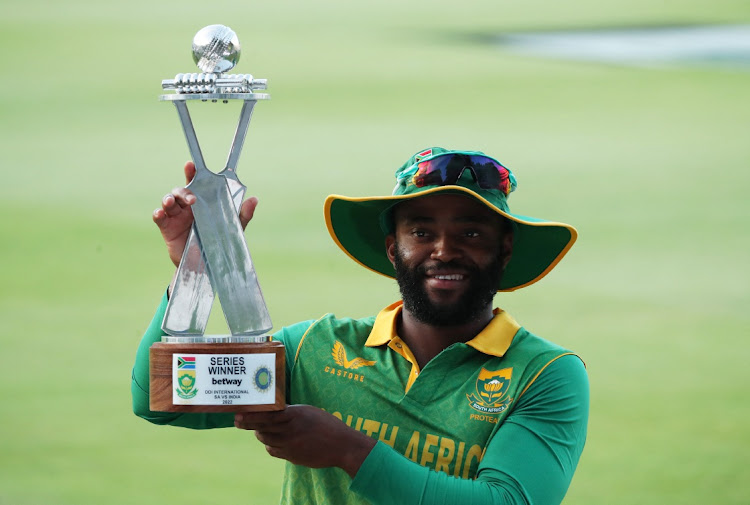 Some captains at times suffer loss of form as the weight of leadership bears heavily on them, but for SA’s white-ball skipper Temba Bavuma it has been the opposite.

Bavuma led from the front as the Proteas whitewashed India 3-0 in their ODI series, a victory made sweeter as all three games were played on pitches that arguably suited the tourists.

The 31-year-old believes the captaincy has brought sharper focus to his own game and made him think deeper about his role, having pushed his career batting average in ODIs above 50 in the series after a fine 110 in the opener.

“I enjoy the captaincy, and I guess there is the knock-on benefit that it seems to have shown in my own performances,” Bavuma said.

“There is a lot of thinking and I enjoy the tactical side of things. With that thinking it also flows into your own performance.

“I am a bit clearer about what I am trying to do. I am always trying to assess the situation and come up with solutions and plans to counter those situations. That has seen an improvement in my own form.”

The victory over India will be a feather in the cap of Bavuma as the side build towards the T20 World Cup to be played in Australia in October and the 2023 Cricket World Cup in India.

“It means a lot to me, and looking back at the series and knowing I contributed significantly to the winning cause of the team makes it better,” he says.

“From a captaincy point of view, you will always be judged on your record and to convincingly beat an Indian side of this calibre and with players of their pedigree speaks a lot about my captaincy.

“Things are still early in my career from a leadership point of view, but I will take the positives. I will also try very hard to not get ahead of myself.”

Pleasing from the home side’s perspective were the hundreds for Bavuma, Rassie van der Dussen and Quinton de Kock as players kicked on after making starts.

You can throw in an excellent 91 from Janneman Malan and it bodes well that the runs are being spread about the top six.

“From a batting point of view, a lot of us have been getting 50s and 60s and then finding ways to get out. The coach [Mark Boucher] gave us a challenge that he wants hundreds this series and as batters we have answered that challenge.

“If you look at the top six at the moment, I think we have five guys who are averaging over 40. That makes for formidable viewing, but also gives a lot of confidence to the team.”