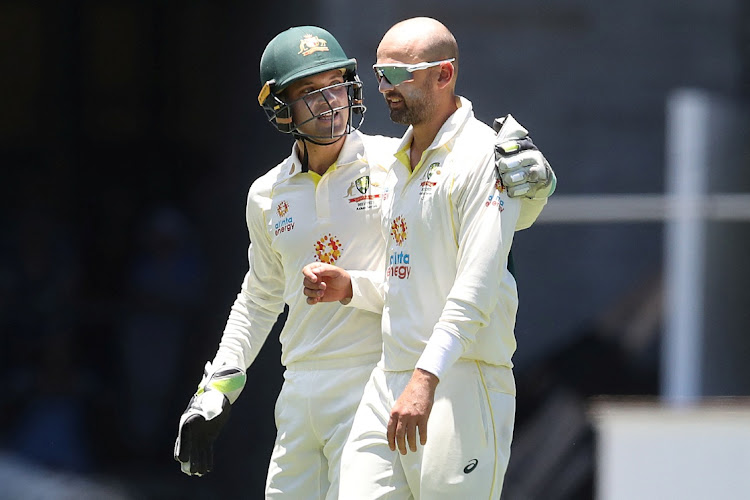 Alex Carey and Nathan Lyon of Australia celebrate a wicket during the first Test between Australia and England at the Gabba in Brisbane, Australia, December 11 2021. Picture: JONO SEARLE/AAP AAP/REUTERS ATTENTION EDITORS - THIS IMAGE WAS PROVIDED BY A THIRD PARTY. NO RESALES. NO ARCHIVES. AUSTRALIA OUT. NEW ZEALAND OUT

Melbourne — A revitalised Australia head to Adelaide brimful of confidence after dominating England in Brisbane and will feel confident a number of gnawing questions over selections have been put to bed.

Australia came into the Gabba match with queries over their middle order after Travis Head was dropped during the 2-1 series defeat against India during the last home summer and all-rounder Cameron Green failed to take a wicket.

Head’s recall for the Ashes ahead of the more experienced Usman Khawaja proved polarising but the South Australian’s sparkling 152 in the nine-wicket win at the Gabba has silenced debate over his place at No 5 in the batting order.

No 6 Green was bowled for a duck, failing to play a shot, but his breakthrough three-wicket haul in Brisbane was a thrill for a team that has searched in vain for a genuine all-rounder since the 2015 retirement of Shane Watson.

Alex Carey, who replaced former skipper Tim Paine behind the stumps, slotted in with aplomb, taking a record eight catches for a debutant wicketkeeper.

A number of other jigsaw pieces fell into place for the Australians, with spinner Nathan Lyon and paceman Mitchell Starc returning to form after their tough series against India.

“I was really happy that just about everyone fired,” said new captain Pat Cummins. “I thought the bowling unit together bowled really well and just about all the batters got going in the game.”

Paceman Cummins had a stellar debut as captain, his match-high seven-wicket haul allaying fears he might struggle to juggle leadership with his bowling duties. His willingness to defer some tactical decisions to vice-captain Steve Smith paid dividends and resulted in the key wicket of Ben Stokes on day four when Smith urged Cummins to insert himself into the attack to break a budding partnership with Jos Buttler.

Australia may need to shake things up a little in Adelaide, with paceman Josh Hazlewood nursing a side strain and opener David Warner struggling with bruised ribs.

Head coach and selector Justin Langer is generally loath to break up a winning team, but Jhye Richardson is likely to play his third Test in the pink ball clash at Adelaide Oval if Hazlewood is sidelined. Australia have won every day-night Test they have played, including the last Ashes clash in Adelaide during the 2017/2018 series.

England have little time to regroup and changes loom after pace stalwarts James Anderson and Stuart Broad were rested for the Gabba, a ploy that backfired as spinner Jack Leach was hit out of the attack and backup seamers Stokes and Chris Woakes were largely ineffective.

Fixing England’s batting in four days ahead of a second Australian pace onslaught is another task altogether, with captain Joe Root again left wanting for support in Brisbane.

Root’s decision to bat first on a grassy wicket after winning the toss in muggy, overcast weather did his batsmen few favours after they were left with virtually no practice due to poor weather. Being skittled for 147 in the first innings was evidence of a lack of preparation for the Gabba’s bounce.

“Managing the bounce on this wicket is something that we didn’t do well enough,” said Root. “We nicked balls not because of lateral movements on occasions but because of extra bounce, playing slightly away from ourselves. Whereas in our own conditions we don’t face that.”

England’s opening combination remains a worry, with Rory Burns bowled for a duck with the first ball of the series and managing 13 in the second innings. His opening partner, Haseeb Hameed, squandered both his starts to be dismissed in the 20s, putting pressure on Root to carry the side’s batting, a role he has been saddled with throughout the year.

Stokes’ fitness is under the microscope after he went wicketless for the match and failed with the bat after a knee strain on day two.

England will not head to Adelaide bereft of positives, though, with pacemen Ollie Robinson and Mark Wood bowling with vigour and menace in Brisbane. The selectors will likely drop Leach for Adelaide after he leaked nearly eight runs an over at the Gabba.