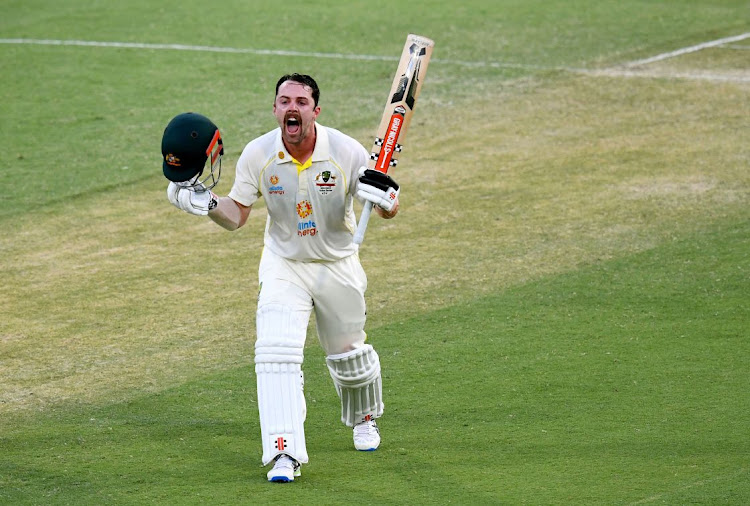 Australia's Travis Head celebrates his century in the first Ashes test against England at The Gabba, Brisbane on December 9 2021. Picture: Darren England/AAP via REUTERS ATTENTION EDITORS - THIS IMAGE WAS PROVIDED BY A THIRD PARTY. NO RESALES. NO ARCHIVES. AUSTRALIA OUT. NEW ZEALAND OUT

Melbourne — Under pressure to justify his spot in Australia’s middle order, Travis Head wasted no time repaying selectors’ faith as he stormed to the third-fastest century in Ashes history to put the hosts in command of the first Test on Thursday.

Head notched his third Test century in 85 balls on day two and became the first to score a hundred in a session at the Gabba, propelling Australia to 343/7 at stumps and a 196-run lead over England’s meagre first innings 147.

While Australia’s day was set up nicely by a 156-run stand between opener David Warner and No 3 Marnus Labuschagne, Head came to the crease as England rallied with a three-wicket fightback before and after tea.

Australia were 195/5 when Cameron Green was bowled by Ollie Robinson after tea, but Head anchored steadying partnerships with Alex Carey and his captain Pat Cummins to wrest back the advantage.

After bringing up his hundred with a sublime on-drive near the close, Head ripped off his helmet and roared before being wrapped in a bearhug by tail-ender Mitchell Starc. He strode off the ground unbeaten on 112, with a bruised chin and sore forearm after wearing two body blows from paceman Mark Wood.

Head was dropped during the 2-1 series loss to India over the last home summer but was recalled for the Ashes squad. He beat out the more experienced Usman Khawaja for the middle-order spot, a decision criticised by former players and pundits.

Head paid tribute to new skipper Cummins and the team staff for making him feel at ease when he joined the camp in southern Queensland in the lead-up to the series. He carried that feeling of calm out onto the field on a broiling hot day on Thursday.

“Patty [Cummins], the coaching staff have been fantastic in the way they've handled the last six or seven days, and how they wanted to see me play,” the South Australian told reporters. “They just wanted me to be myself and play the game and play how I see it. They’ve got great confidence in that, so I was really relaxed. Today it went my way.”

England were in all sorts of bother at stumps, with fitness concerns over seam-bowling all-rounder Ben Stokes and an attack that was exhausted after a long, hot day in the field.

Head said Australia would not ease up on day three. “We know they’ll come back tomorrow,” he said of England. “They’re not on the ropes. It’s a long series.”