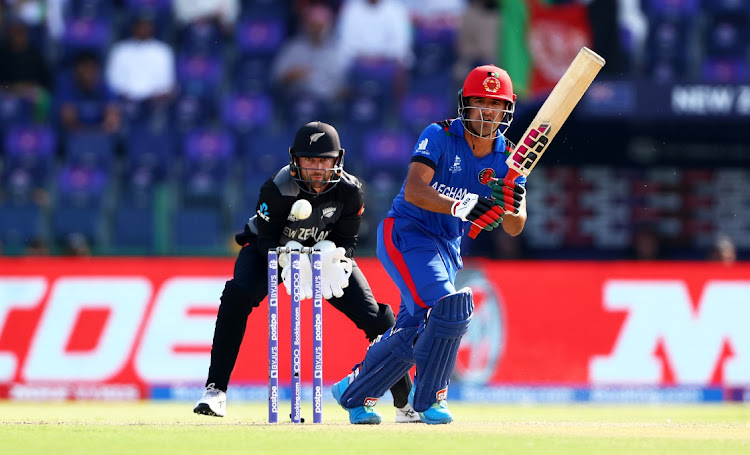 Dubai — New Zealand crushed a billion Indian dreams and breezed into the semifinals of the T20 World Cup with an eight-wicket victory over Afghanistan in a Super 12 match on Sunday.

The fates of three teams were tied to the outcome of the match, each fancying their chances of becoming the second side from the pool, behind Pakistan, to make it to the last four.

An Afghan victory would have suited 2007 champions India, who have the best net run rate among the trio with a match to spare, while New Zealand had to simply win the game to advance, which they did in style.

Najibullah Zadran smashed a career-best 73 to rescue Afghanistan from a top-order collapse and post 124/8 at the Zayed Cricket Stadium in Abu Dhabi.

New Zealand romped home with 11 balls to spare to join England, Australia and Pakistan in the last four.

“Strong performance, we know how dangerous this Afghanistan side is,” New Zealand captain Kane Williamson said after anchoring their chase.

“It’s nice for us to be able to set the tone with the ball first up, take some wickets early and then restrict them to a below-par total. It was a 150-155 surface.”

Afghanistan captain Mohammad Nabi won the toss but the strong start he expected from his team did not materialise.

They were reeling at 19/3 in the sixth over, a mini-collapse that started when Devon Conway took an acrobatic catch behind the stumps to dismiss Mohammad Shahzad.

Zadran rebuilt their innings with his stroke-filled knock but his stay was cut short by another stunning catch, this time by a diving Jimmy Neesham at long-off.

Trent Boult dismissed Karim Janat in the same over for his third wicket and New Zealand put on a catching masterclass to restrict their opponents to a below-par total.

Off-spinner Mujeeb Ur Rahman dismissed Daryl Mitchell (17) in the fourth over and Rashid Khan sent back Martin Guptill (28) but it was not enough to test New Zealand’s batting strength.

Williamson oversaw New Zealand’s chase with an assured 40 not out while Conway was unbeaten on 36.

New Zealand finished their group campaign with eight points, four ahead of India, who play Namibia in their final match on Monday, and Afghanistan.

“We didn’t start well,” Nabi said after Afghanistan signed off with their third loss in five matches. “We played good cricket in the tournament, and we will take a lot of positives. We need to correct the mistakes we made with the bat.”