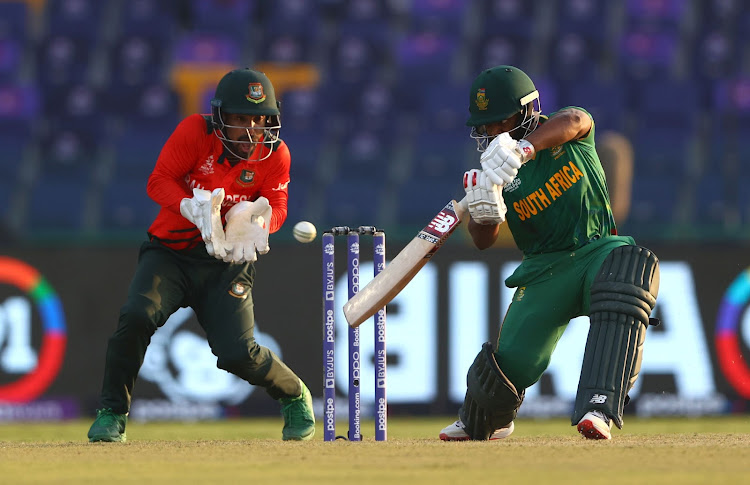 SA have virtually been playing knockout cricket since their opening defeat to Australia but after seeing off Bangladesh by six wickets, skipper Temba Bavuma is excited about a potential do-or-die clash with England.

The Proteas are second in Group 1 of the Super 12 at the ICC Men’s T20 World Cup, and with a net run rate advantage over Australia, know that a win over England might be enough to secure a spot in the last four.

For Bavuma, who scored an unbeaten 31 in the win in Abu Dhabi, the performance of fast bowlers Kagiso Rabada and Anrich Nortjé, who took three wickets apiece, was a promising sign for the future.

“It was a good day for us. There was quite a lot in the wicket early on, and KG [Rabada] and Nortje were able to exploit it. It was a good effort with the ball and then clinical with the bat as well,” Bavuma said.

“It excites us [seeing the ball fly through]. The conditions reminded us of playing at home. We’re blessed to have both those guys running in with the new ball. It’s never easy [for a batsman] when you have one guy bowling 150 [km/h] and another guy in KG who’s got all the skill in the world.

“We wanted to get the score in a good time, but the conditions were a bit tricky. The ball was still nipping around but I guess you have to try to pounce on the loose ones and take away whatever pressure there was.

“It’s a big game [against England], every game has been for us. Looking at the competition the way it is, it’s one that we want to play our best cricket. England have had the better of us recently, and we would like to make amends.”

Rabada came out in defence of Bavuma who has come under fire from a section of fans after a slow start with the bat at the tournament.

In his first two matches, against Australia and West Indies, Bavuma was lean on the runs, managing only scores of 12 and two.

The SA skipper, who was widely lauded for the way he handled the Quinton de Kock debacle, has returned to form with scores of 46 against Sri Lanka and an unbeaten 31 in the six-wicket win over Bangladesh on Tuesday in Abu Dhabi.

“There is nothing more I can say about Temba because the results are there,” said Rabada.

“You will always have critics and it is something that we have made peace with. You can’t take the good without the bad, and at the end of the day we actually put ourselves under more pressure than the public does.

“People are entitled to their opinions, and in saying that, we see a lot of value in people who genuinely support us.”