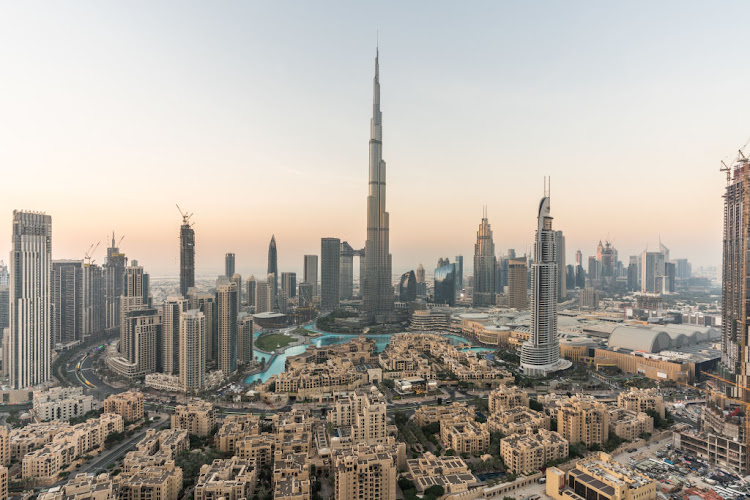 A view of Downtown Dubai with the Burj Khalifa at the centre. Picture: RUSTAM AZMI/GETTY IMAGES

Siliguri — Stadiums in the United Arab Emirates (UAE) will operate at 70% of capacity for the Twenty20 World Cup, the organisers say, though conditions in Oman, where preliminary rounds are due to be played, have still to be fully assessed after a cyclone.

Tropical cyclone Shaheen struck coastal areas of Oman, including the capital of Muscat on Sunday, two weeks before preliminary round matches of the tournament star on October 17.

About 3,000 fans will be accommodated at Al Amerat stadium in Muscat, the International Cricket Council (ICC) said on Sunday, though the cyclone left streets in the Omani capital under water, prompted evacuations from coastal areas and delayed flights in and out of the country.

The 16-team tournament was shifted to the Gulf states as a result of a surge of Covid-19 infections in India, but the Indian cricket board remains the event host.

The ICC said it and the Indian board had worked closely with host authorities to ensure fans are welcomed in a safe environment and Covid-19 protocols are applied at all venues.

“The T20 World Cup is the largest sporting event to be held in the region and it will be the biggest global cricket event since the pandemic with fans in the grounds,” the ICC said.

In the UAE all venues will be operating at about 70% of maximum seated capacity, while Abu Dhabi has introduced new socially distanced “pods” of a maximum of four spectators on their east and west grass mounds, it said.

Dubai, which hosts matches including the November 14 final, and Sharjah are the two other venues in the UAE.

The UAE is hosting the Indian Premier League with fans at a reduced capacity.

Dominant Big Four use their power in a disgraceful manner, and CSA will need a good CEO to lead the way for SA
Opinion
3 weeks ago

Cricket SA and provinces cannot afford to be too particular about how they put food on the table, and betting firms are offering funding alternatives
Opinion
3 weeks ago

Australia’s opener axed for the second time this season, leaving him without match practice
Sport
3 weeks ago
Next Article