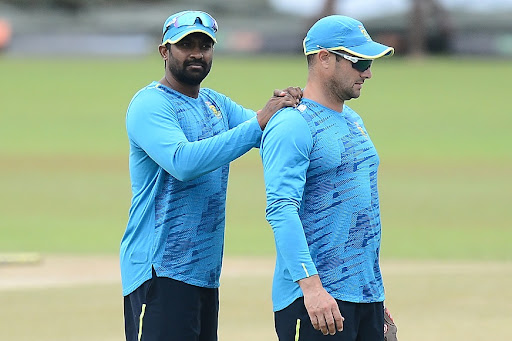 Proteas coach Mark Boucher gets a massage from the team physiotherapist before the second ODI against Sri Lanka in Colombo on September 4 2021. Picture: Isuru Sameera Peiris/Gallo Images

Mark Boucher said in his report card after the Proteas wrapped up a third successive T20 series win away from home that while they are not yet the finished product, with the T20 World Cup starting in October, he is happy with their progress.

The Proteas concluded their six-match limited-overs tour of Sri Lanka in emphatic style in Colombo on Tuesday as they smashed their hosts by 10 wickets in the third and final game, to take the T20 series 3-0. SA lost the ODI series 2-1.

With the Proteas having secured the three-match series 2-0 going into the dead rubber at R Premadasa Stadium, Boucher’s team dominated from start to finish and strolled to an easy win, their joint-record seventh T20 victory on the trot.

“I think there were some personal goals,” Boucher said of how the Proteas, with not much at stake, approached the dead rubber as if they had to win it to save the series.

“This team realises we are definitely not the finished product. There are a lot of things we speak about after each game.”

The Proteas started their preparations for the World Cup, to be held in the  United Arab Emirates and Oman from October 17 to November 14, with a tour of the Caribbean in July, where they came from behind to defeat the world champion West Indies 3-2.

They followed that up with a 3-0 whitewash over Ireland in August and have now beaten Sri Lanka by the same margin, all away from home and in unfamiliar conditions.

Boucher said the team had taken stock after they crushed Sri Lanka by 10-wickets to sign off on their limited-overs tour.

“We had a very good chat yesterday with regards to where we are, the lessons we have learnt coming from the West Indies, and where we want to go as a team,” he said.

“I think they took that to heart. [Stand-in captain] Keshav Maharaj had some good words to say too, along with a couple of other senior players.

“We understand that going to the World Cup, you have got to treat each game as [being as] important as the others.”

Boucher said he wants the Proteas to be driven by a winning mentality as they prepare to leave for the Cup in a fortnight’s time.

Boucher believes the wicketkeeper-batter will be the Proteas’ trump card at the World Cup.

“I think he is in a happy space at the moment. It is great to see him performing. He will be a big name for us in the World Cup.”

Maharaj said the Proteas were spurred on by losing the ODI series to Sri Lanka.

SA languish in ninth place on the Super League table, outside the automatic qualifying spots
Sport
11 months ago
Next Article