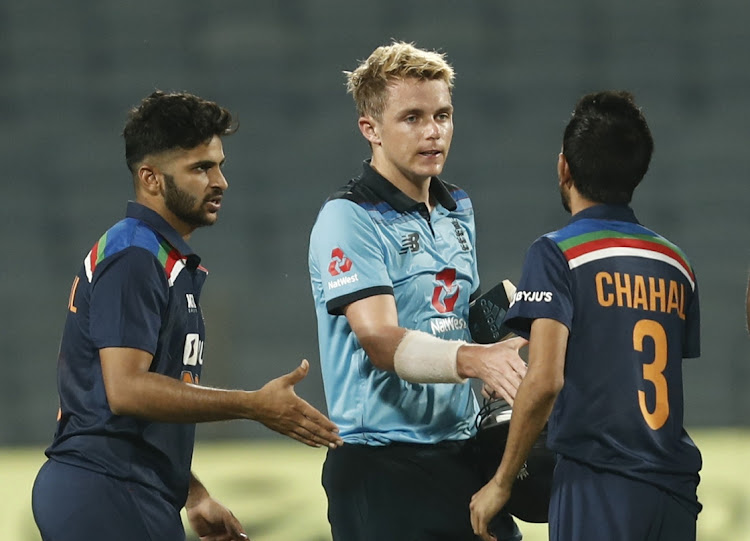 Mumbai — India seamers Shardul Thakur and Bhuvneshwar Kumar snared seven wickets between them to help the hosts beat England by seven runs in a thrilling third one-day international on Sunday and win the series 2-1.

England’s chase of 330 appeared all but over when they were reduced to 257/8 in the 40th over, but Sam Curran and Mark Wood, who made 14, kept their side in the hunt with a stubborn 60-run stand for the ninth wicket.

All-rounder Curran, who was dropped on 22 and then again on 87, remained unbeaten on a career-best 95 but could not hit the required 14 runs in the final over with England finishing on 322/9.

On a sweltering day in the western Indian city of Pune, the hosts were dismissed for 329 after being put in to bat with Shikhar Dhawan, Rishabh Pant and Hardik Pandya scoring half-centuries.

The target did not appear too imposing for England, who chased down 337 with 39 deliveries remaining in the previous match, but Kumar’s early breakthroughs put the hosts on top. Kumar, who picked up 3/42, got the new ball to move in the air and dismissed openers Jason Roy and Jonny Bairstow cheaply and almost got his third but Pandya dropped a skier from Ben Stokes, with the left-handed batsman on 15.

Stokes, who also survived a run-out chance on 24, holed out in the deep for 35 off an innocuous full-toss delivery from T Natarajan, who was called upon to bowl the final over. Thakur picked up the wickets of Dawid Malan, who made 50, the dangerous Liam Livingstone and England captain Jos Buttler to derail England’s chase. He finished with 4/67.

Dhawan, who scored 67, and Rohit Sharma earlier combined in an opening stand of 103 to give India a brisk start before leg-spinner Adil Rashid dismissed them in successive overs.

Off-spinner Moeen Ali then spun the ball sharply back into Virat Kohli to dismiss India’s skipper for seven and the hosts appeared in trouble when KL Rahul also fell cheaply to part-time spinner Livingstone shortly after.

Dolphins and Titans set for final showdown in Durban

NEIL MANTHORP: Club cricket seems to be leading the game to doom