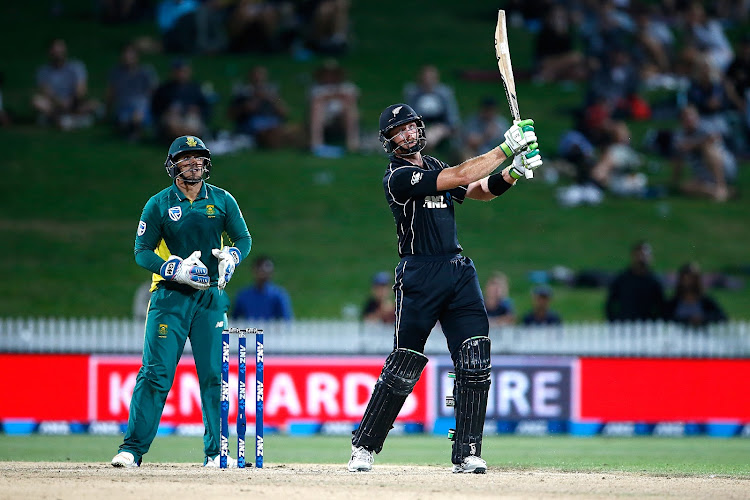 Martin Guptill fell just short of a third Twenty20 international century but his strong return to form helped New Zealand to a four-run win over Australia in the second match in Dunedin on Thursday.

New Zealand extended their lead to 2-0 in the five-match series after their 53-run win in Christchurch. Opener Guptill smashed 97 off 50 balls and shared in a 131-run partnership with captain Kane Williamson (53) as New Zealand put 219/7 on the board and set an imposing chase in front of a sell-out crowd at University Oval.

“Outstanding knock from Martin,” Williamson said. “The presence he brings at the top of the order along with that power game that he has, it was great to see that today.”

Guptill’s knock ended a run of low scores after he was out for a duck in Christchurch and made a total of 46 runs in three T20s against Pakistan in December.

“I’m a little cooked at the moment but it’s nice to get some runs and another win,” said the 34-year-old. “My mind has been clear. Things just haven’t gone my way.”

While Guptill was relieved, Australia captain Aaron Finch’s struggles continued with his dismissal for 12 by leg spinner Ish Sodhi. Finch scored one run in Christchurch and was passed over in the Indian Premier League auction after managing just 179 runs at 13.76 from 13 innings in a poor Big Bash League campaign for the Melbourne Renegades.

New Zealand’s bowlers looked set to wrap the match up quickly when Mitch Santner (4/31) reduced Australia to 113/6, having both Ashton Agar and Mitchell Marsh out for ducks in consecutive balls.

But Marcus Stoinis (78) and Daniel Sams (41) threatened to steal the match as they attacked the short boundaries with gusto in a quickfire 92-run partnership.

Australia needed 15 runs off the last over but James Neesham had Sams caught in front of the deep midwicket boundary with the first ball. Stoinis needed a six and a four in two balls to win the game but was caught slogging to long-on as Australia finished 215/8.

“I thought we didn’t bowl too badly today,” said Finch. “But Guptill played a brilliant innings in that partnership with Kane, built a lot of momentum.”

The series continues in Wellington on March 3.