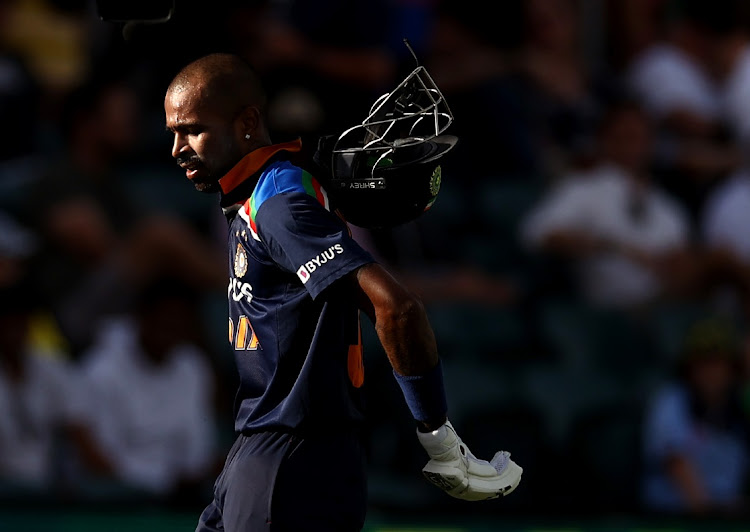 Hardik Pandya of India leaves the ground on 92 not out at Manuka Oval on December 02 2020 in Canberra. Picture: RYAN PIERSE/GETTY IMAGES

Mumbai — India all-rounder Hardik Pandya scored his highest one-day international score of 92 to set up a thrilling 13-run win for his team against Australia in the third match at the Manuka Oval on Wednesday and avoid a clean sweep in the series.

Pandya’s unbeaten knock in 76 deliveries featured seven fours and one six. He added 150 in an entertaining unbroken stand for the sixth-wicket with Ravindra Jadeja to help India post 302/5.

The hosts seemed cruising in their chase but India’s pace spearhead Jasprit Bumrah dismissed Glenn Maxwell with Australia 35 runs away from a win to turn the game in his team’s favour. Bumrah returned in the last over to take the final Australian wicket to bundle them out for 289 with three deliveries remaining.

Maxwell fell for 59 off 38 balls and one of his four sixes landed on the top of the roof of the stadium in Australia’s capital city.

Australia captain Aaron Finch top-scored with 75 to set up the chase after a charmed life during which he was dropped twice early in his innings and survived a run-out chance.

Shardul Thakur was one of the four changes in the Indian side and was the most successful bowler with 3/51 while Bumrah and debutant T Natarajan picked up two wickets each.

India won the toss for the first time in the series and opted to bat, having failed to chase Australia’s score in the previous two matches.

The host’s bowlers, however, kept the batsmen in check and reduced them to 152/5 in the 32nd over when India captain Virat Kohli was out for 63 to fast bowler Josh Hazlewood for the third time in the series.

During his knock, Kohli became the fastest batsman to reach 12,000 runs in the 50-over format, reaching the milestone in his 242nd innings. The 32-year-old Kohli broke the record of India batting great and all-time leading run-scorer Sachin Tendulkar, who reached the milestone in 300 innings.

Jadeja, who smashed five fours and three sixes in his unbeaten 66 off 50 balls, and Pandya added 76 from the last five overs to give India a late boost.

The two sides will next play three Twenty20 matches, starting with the first on Friday at the same venue.

Chennai get the better of Mumbai as IPL begins

Spilt catches and misfieldings indicate that the players, most of whom had not played competitively for months, were not too sharp
Sport
10 months ago