With the T20 World Cup less than a year away, planning and preparation is crucial 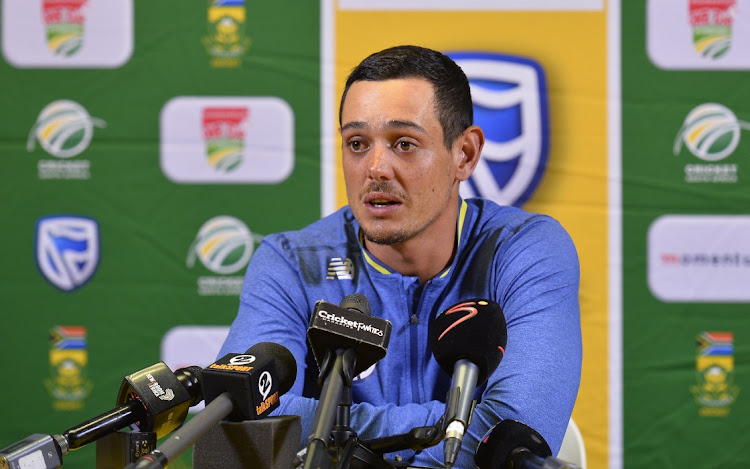 Eoin Morgan’s T20 charges are coming across as a crack outfit‚ even though they are still trying to find their feet.

They are a side that while chasing in the T20 series found different ways of beating SA in the first two matches at Newlands and Boland Park.

Quinton de Kock’s battered team will have to face the music one more time at Newlands in the last of the three T20s before the action shifts to the 50-format on Friday.

As the 50-over world champions‚ England are an already formidable unit and they are starting to have the same look in the shortest format.

The same cannot be said of SA‚ whose teething process is going on for longer than expected under coach Mark Boucher. Here are five things they need to have taken in as the T20 World Cup is less than a year away and requires more planning and preparation.

1. Sustaining momentum. The thing with T20 cricket is that while there are only 120 balls to play with‚ teams have batsmen who know how to use them effectively. SA’s top three are capable of that‚ especially Faf du Plessis and De Kock‚ so are Reeza Hendricks and Temba Bavuma.

It is what comes after them that is an issue. Reasonably quick starts have been wasted‚ while England have shown they cannot only resuscitate themselves from bad starts‚ but increase the tempo as and when it is required. England have the personnel to do that‚ SA does not.

2. Adaptability. Jonny Bairstow is a limited-overs opener by trade‚ but when dropped down to No 4 to fit the team’s needs‚ he looked the part. There was a fair bit of conjecture with regards to Du Plessis dropping one down to No 4 on Sunday‚ but it showed an inflexibility of thinking that has invaded SA while England are happy to move players around to fit a particular need at a particular time.

3. Middle to lower-order lack of punch. As the Indian Premier League showed‚ the bulk of India’s best batsmen bat in the top four. This leaves the No 5 and six slots largely unoccupied by locals. This has affected them in a way where players now have to drop down and bat in unfamiliar spots without the requisite match intelligence for the particular batting slot.

SA have a slightly similar problem in that the bulk of the blue-chip batters are top-order strikers and have not always given themselves an opportunity to adapt to lower order.

4. David Miller must be referred to in past tense. To highlight the plateauing and stagnation of Miller‚ one needs to look at Morgan’s rise as a limited-overs batsman. Morgan is three years older than Miller and started his career earlier.

One thing they have in common is that they are the most senior players in each squad‚ but with hugely contrasting returns. Morgan has been every bit of a senior player‚ even when he has not contributed with the bat. Miller has been a passenger and the fact he was sparingly used by the Rajasthan Royals in the IPL spoke volumes of how his stock has fallen. It is no longer about reputations now.

5. Clarity of thought leads to clarity of action. When it comes to the bowling department‚ De Kock has the armoury‚ but a steep learning curve is in the form of knowing when and how to use it. There have been bright sparks‚ especially in the use of George Linde and Tabraiz Shamsi‚ but the meagre totals he has had to defend have pushed him into corners.

He will learn over time‚ despite his batting responsibilities that the conviction of thoughts and actions lead to better results. Sometimes the ideas are there and execution is not‚ but England’s railroading batsman can and will disrupt plans. The process will be painful for De Kock‚ but if he sticks to it‚ it will work out eventually.

With the appointment of a talented interim board, cricket’s woes have been addressed. There’s still a way to go, writes Luke Alfred
Life
8 months ago

Drama that played out in the boardroom of the game’s administration was ‘not ideal’, says Van der Dussen
Sport
8 months ago
Next Article