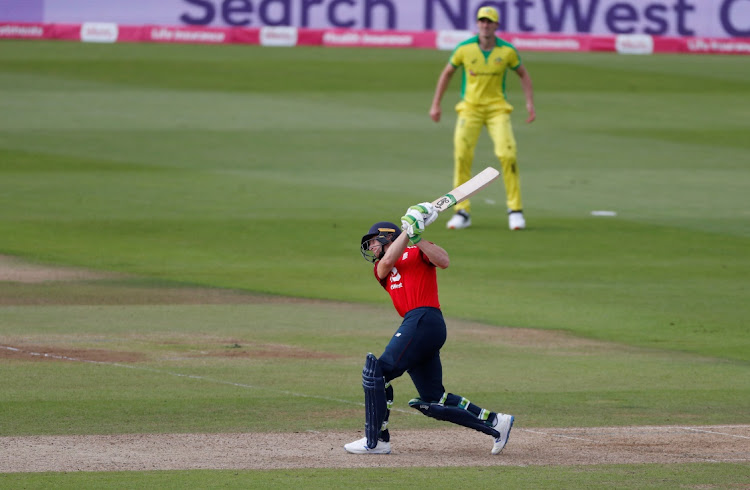 England's Jos Buttler hits a six to win the match against Australia, in Southampton, the UK, September 6 2020. Picture: REUTERS/PAUL CHILDS

England’s explosive wicketkeeper-batsman Jos Buttler says they are concerned at whether their limited-overs tour to SA is going to take place in light of Cricket SA’s administrative upheavals.

England were set to arrive in SA on Tuesday in the wake of the rejection by Cricket SA’s members council of the interim board appointed last week by sports minister Nathi Mthethwa.

The action triggered threats of government intervention by Mthethwa. Cricket SA was then forced into appointing the interim board on Monday.

“We’ve heard what has happened with the board in SA recently and we thought that was going to be sorted out in time for the tour. We were waiting to hear if the tour was going ahead and reading in the papers and seeing that the tour was in doubt. We were wondering‚” Buttler said.

“Ashley Giles got in touch with the players and said he was confident the tour was going ahead and will keep everyone in the loop. I think everyone is grateful and delighted that the tour is going ahead.”

In what seems to be a thawing of relations‚ Cricket SA interim board chair and retired judge Zak Yacoob confirmed that the temporary leadership will report to the members council but will not be dictated to.

The 72-year-old retired Constitutional Court judge said on Tuesday that they will work with the members council‚ made up of the 14 Cricket SA provincial affiliates’ presidents. It is the organisation’s highest decision-making body.

Buttler‚ who played throughout the English summer Covid-19 bubble — during which the England and Wales Cricket Board successfully hosted Australia‚ West Indies and Pakistan — said they have become accustomed to playing with tough Covid-19 restrictions.

However, he said the effect of playing in the bubble and being away from family could not be discounted.

“We’ve got quite used to the restriction. We’ve got used to it in England and a few of us have taken part in the Indian Premier League (IPL). It’s going to be much of the same and while SA is a great tour‚ we won’t get to fully enjoy it as we usually would. But everyone has become accustomed to what things are like‚” Buttler said.

“In the summer‚ you spend a lot of time away from your family and they’re not even that far. It was fantastic to be able to take my wife and daughter out to the IPL. It made a big difference when they were there with me.”

Despite Cricket SA’s administrative issues‚ SA still have a formidable squad, five of whom took part in the recently completed IPL.

Quinton de Kock‚ SA’s limited-overs captain‚ played a critical role in the Mumbai Indians winning their fifth title, while Kagiso Rabada and Anrich Nortjé were teammates at the Delhi Capitals‚ the losing finalists.

Buttler‚ who fired intermittently for the star-studded but spluttering Rajasthan Royals‚ said the IPL helped to give them a closer view of their SA counterparts.

“The guys you mentioned have been around for a while and we’ve played against them in different tournaments and series. The thing about the IPL is that you get to play against these guys close up, and in international cricket there aren’t too many surprises‚” Buttler said.