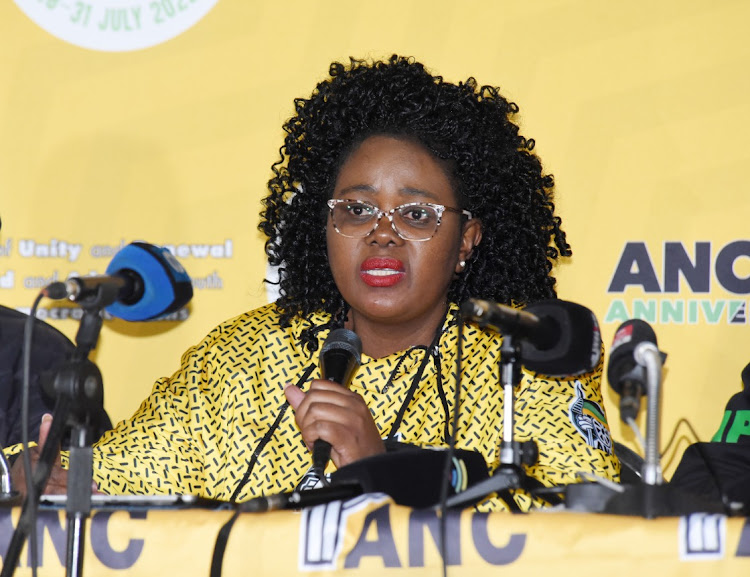 There was a solemn tenor to the ANC’s talks on SA’s economic crises during its policy conference at the weekend.

Finance minister Enoch Godongwana chaired the economic transformation subcommittee (ECT) commission in which state ownership of the Reserve Bank was discussed, but not as an immediate priority.

On Saturday, NEC member and human settlements minister Mmamoloko Kubayi, who is the subcommittee head, reflected on the debates, which had not concluded by late on Saturday night. Godongwana previously led the ECT.

Kubayi said there were five key areas of concern during the talks: unemployment, especially among the youth; the necessity of a state bank; land expropriation; energy security; and the Reserve Bank’s mandate.

The Reserve Bank’s price stability mandate and its ownership have long been contested issues within the ANC. The party passed a resolution at its national conference at Nasrec in 2017 calling for the nationalisation of the Reserve Bank, which still has some private shareholders, though government declined to implement this, in part because of the huge cost to taxpayers it would involve. And public protector Busisiwe Mkwhebane recommended in a report on banking that the Reserve Bank’s mandate be broadened to force it to focus on employment, a recommendation SA’s courts subsequently found to be unconstitutional. There have also long been calls from with the party and its alliance partners for the formation of a state-owned bank.

ANC member Kenneth Creamer, an economist, said: “I’ve been sitting in these meetings for 30 years and I would say that the mood among the ECT was extremely serious and reflected on the problems of the SA economy.”

Delegates at what Creamer insisted was a “well-attended” gathering spoke of the need for the ANC government to better address bread and butter issues, including the cost of living, fuel price hikes and load-shedding.

“There was a real seriousness from very high level ANC members — a president, a former president — in the commission down to youth league members,” he said

Internal engagements at the sixth such event, attended by a reported 1,800 delegates, reflect the ANC’s diverse views on policy issues. They lead to recommendations, which will inform resolutions taken at the elective conference in December. Proposals are dismissed when they do not harness sufficient backing.

Kubayi said SA “should be able to fast track” the establishment of a national bank. She reported engagements about the Reserve Bank were not necessarily about “tampering” with its constitutional mandate. Delegates, she reported, suggested asking the Reserve Bank to “intervene” in job creation “during and above inflation targeting”.

“There was no question of trying to compromise the independence of the Reserve Bank,” explained Creamer. However, certain delegates raised the “historical anomaly” of private shareholding, arguing it compromised ordinary South Africans’ perceptions of the Bank.

Only a handful of countries allow for non-government shareholders in their reserve banks. The Reserve Bank has about 800 private shareholders. No shareholder may own more than 10,000 shares and they play no role in deciding monetary policy.

The constitution sets out its mandate to protect the rand’s value “in the interest of balance and sustainable economic growth”, which must be performed independently without fear, favour or prejudice.

“It’s meant to be a state-owned bank. In the long run it would be better to secure that independence. But given the number of priorities that we have in this country that was not seen to be the number one priority,” said Creamer.

“If you are to buy the shares, it is dependent on the shareholder, on the amount they are selling. We don’t think we should be able to buy an excessive amount. But, secondly, was the issue that: if you need to take the share or nationalise those shares, it means you must amend the constitution,” said Kubayi.

“It’s a question of timing and dealing with all of the ... ensuring that speculators are not using the state ownership of the central bank to profit unduly from that process,” said Creamer.

President Cyril Ramaphosa’s energy plan to end load-shedding, announced earlier this week, received the ETC’s endorsement. Creamer said the proposal to cut red tape would open a “floodgate” of investment for new energy sources, including renewables. It, he continued, would relieve the national grid, allowing Eskom to conduct maintenance and save on diesel.

“In the longer term, obviously, Eskom will be a publicly owned entity. The grid company in particular will have a strategic role to play and the generation side ... will have a mix of public and private inputs, massively transitioned,” said Creamer.

Quoting the Quarterly Labour Force Survey (QLFS) in June, Stats SA announced youth unemployment in the first quarter of 2022 for those aged 15-24 was 63.9%, whereas the national rate stands at 34.5%.

Kubayi said there was a proposal that youth unemployment be declared a national crisis to unlock emergency funding as occurred during the Covid-19 state of disaster. “The how part needs to be done by the state,” she said.

She said the ANC was looking to secure support from other parties in parliament to advance land expropriation without compensation in certain circumstances, which it was previously unable to pass due to insufficient votes.

The effect of the most violent and deadly civil unrest in democratic SA, which was stoked by political tension and led to about R50bn in economic losses, was not discussed. Kubayi said there were general talks on issues hampering economic growth, including construction syndicates and attacks on freight trucks.

“There was a sombre mood in the commission and it was due to the fact that we’ve never had unemployment, poverty, inequality increasing as it is since we had a democracy in 1994 and it requires urgent interventions. It’s about coming together to deal with this economic crisis,” said Creamer.

If you boo, you get booted out, ANC chair Gwede Mantashe told Business Day
Politics
1 week ago

Media briefing delayed at ANC policy meeting, despite being ‘strict about starting on time’

Those that called for the step-aside rule to be scrapped failed to convince the plenary of 1,800 branch delegates at the party’s national policy ...
Politics
1 week ago
Next Article

Ramaphosa’s take on Phala Phala is the elephant in the room at the ANC policy ...

Ramaphosa’s take on Phala Phala is the elephant in the room at the ANC policy ...