Leadership of Bathabile Dlamini, who was convicted of perjury last week, hangs in the balance 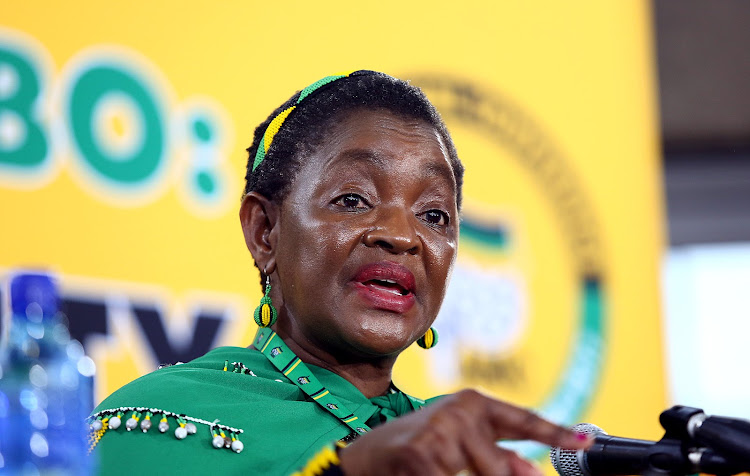 The ANC has appointed former National Assembly speaker and current defence minister Thandi Modise to lead a task team to determine if the leadership of the ANC Women’s League (ANCWL) should remain in office.

The decision was announced by ANC spokesperson Pule Mabe after a meeting of the party’s national working committee. The NWC is responsible for the ANC’s day-to-day affairs.

The move could result in the dissolution of the national executive committee of the women’s league led by embattled former social development minister Bathabile Dlamini.

Dlamini’s NEC has been in office since 2015 and its term of office has expired.

Mabe said the decision was taken after the NWC received a report on preparations for conferences of the ANCWL, ANC Youth League and the ANC Veterans League.

“The NWC noted that the NEC of the ANC Women’s League was elected in 2015 and its five-year term of office has expired. The NWC appointed a task team consisting of Thandi Modise, convener, Nathi Mthethwa and Jenny Schreiner to consider the status of the ANCWL.”

Modise and her team were expected to make recommendations to the ANC NEC.

The NEC was due to hold its next meeting from March 25 to 27.

It has already dissolved the provincial executive committees of the Eastern Cape and Mpumalanga after their terms of office expired.

The latest move by the ANC comes after Dlamini was last week found guilty of lying under oath by the Johannesburg magistrate’s court, a charge that stemmed from her tenure as social development minister.

According to ANC rules, any member charged with a serious crime should step aside from their position.

Mabe said the party has appointed NEC member Gwen Ramokgopa to assist in the running of the office of the secretary-general as Ace Magashule remains on suspension.

Since Magashule’s suspension last year, his deputy Jessie Duarte has been running matters, but she has taken ill.

Ramokgopa will work with treasurer-general Paul Mashatile who has been seconded to the office of the secretary-general.

News of Ramokgopa being sent to the office has met with  pushback from some in the ANC, with insiders viewing her deployment as part of a power grab by ANC president Cyril Ramaphosa and his supporters.

Mabe confirmed that the NWC received reports from its subcommittees on  the lifting of the national state of disaster and would discuss them at the next NEC meeting.

The party was satisfied with how Ramaphosa’s administration was handling the Russia-Ukraine conflict.

The region, with about 100,000 members and 111 branches, plays a big role in the province’s politics and is  influential at the ANC’s national ...
Politics
2 months ago
Next Article