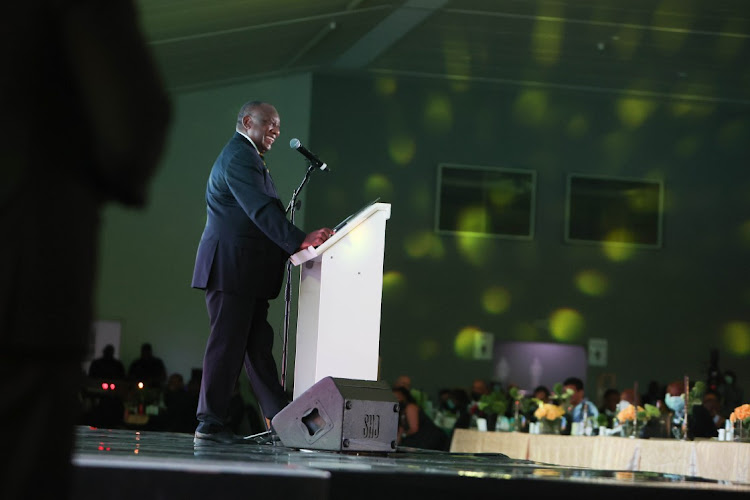 The lights went out at the party's gala dinner while President Cyril Ramaphosa was thanking the business community for its financial support.

Before the lights failed, Ramaphosa was expressing his gratitude to those who had stood with the ANC.

“Apart from signifying your financial support by being here, this is proof that you still have trust in the ANC. We thank you for helping the ANC achieve sustainability and stability — for having the courage to come tonight to be associated with the ANC”, he said.

Ramaphosa had just assured business that economic recovery plans were in place and that the ANC renewal project was not just a pipe dream. The president had also admitted that the ANC NEC was concerned about security breaches that led to attacks on institutions such as parliament.

President Cyril Ramaphosa delivered a speech to investors and various ANC dignitaries at an ANC gala dinner in Polokwane, Limpopo on January 7 2022. Ramaphosa made a hasty exit as the power cut towards the end of his speech.

Ramaphosa had to finish his speech in the dark and project his natural voice as the power went off.

After the speech, he was whisked out by his security detail and deputy president David Mabuza and national chairperson Gwede Mantashe also left.

The Gala dinner is a fundraiser for the party with patrons dishing out huge amounts of money to secure tables at the event.

ANC treasurer-general Paul Mashatile is the party's fundraiser and would have been responsible for organising the event. He told the media just minutes after the incident that there was nothing to be embarrassed about.

“How do I get embarrassed by the problem of the venue of other people?” Mashatile said in response to a question. “What must I do? We hired a venue, electricity trips. Why is it a fault of the ANC leadership?” he said.

On Sunday police minister Bheki Cele said the electricity to the hall had been deliberately turned off.

This is just one of a few incidents that have seemingly embarrassed Ramaphosa, with others seen as security threats.

On Thursday, Ramaphosa had to be whisked away from the stage by state security minister Zizi Kodwa at an event organised by the Women's League where he was expected to deliver a speech.

Earlier on Friday scores of ANC Youth League members tried storming an event he was scheduled to address aimed commemorating the life of Peter Mokaba.

Mashatile flatly refused to link the incidents that have occurred around the president in the build up to the January 8 statement.

He explained that security protocols do not allow the president and his deputy to be in a dark room so they had to leave the venue.

Updated: January 8 2022
This article has been updated to reflect comments by the minister of police