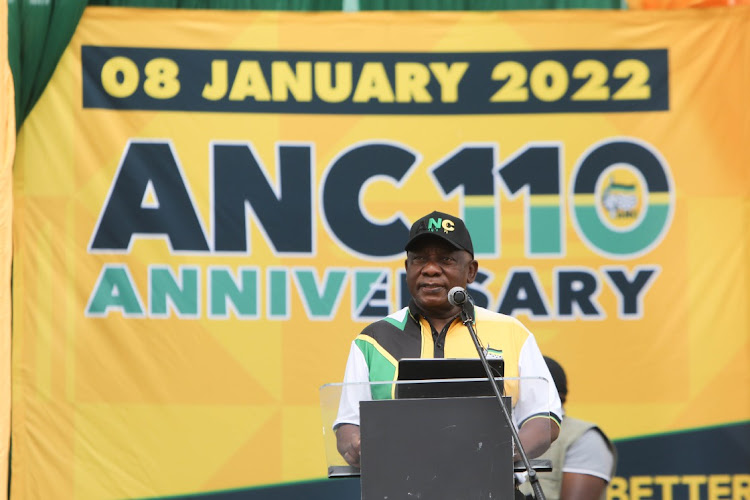 ANC president Cyril Ramaphosa delivers the January 8 statement at the Peter Mokaba Stadium in Polokwane where the ANC is celebrated its 110th birthday on January 8 2022, . Picture: Alaister Russell/The Sunday Times

President Cyril Ramaphosa, in his role as ANC leader, on Saturday emphasised the need for the income grant that the government pays to the millions of indigent and unemployed in a country where 46% are without work.

Ramaphosa was speaking at the party’s annual January 8 event to commemorate its founding in 1912.

Nearly two years after the introduction of the Covid-19 R350 social grant that is due to end in March, Ramaphosa said there was a need for financial support.

“We support government’s decision to continue to implement public employment programmes to support unemployed working-age adults and will support its work in consultation with organised labour and other social partners in developing these programmes,” he said.

Ramaphosa was addressing scores of party members at the old Peter Mokaba Stadium in Polokwane.

“The social relief of distress grant has provided vital support for the unemployed during the pandemic, reaching 9.5-million people and lifting 5-million above the food poverty line,” he said.

“There is a clear need for some form of income support for unemployed and poor South Africans based on clear principles of affordability and sustainability.”

In December, TimesLIVE reported that a team of experts had recommended the Covid-19 grant be institutionalised and form part of the platform for an expanded basic income system.

Ramaphosa said: “The Covid-19 pandemic exacerbated our already precarious economic position. Around 1.5-million jobs have been lost since the start of the pandemic and unemployment is at its highest ever.

“The ANC must strive to ensure that a progressive commitment to social justice forms the basis of our outlook as a nation.

“We must be at the forefront of combating all forms of retrogressive ideas and behaviour such as racism, tribalism, patriarchy, homophobia, gender-based violence and femicide, child abuse, substance abuse, anti-poor sentiments and policies, and other forms of discrimination against those who are vulnerable.”

THABANG MOKOPANELE: Only if findings are acted on will Zondo commission be ...

THABANG MOKOPANELE: Only if findings are acted on will Zondo commission be ...