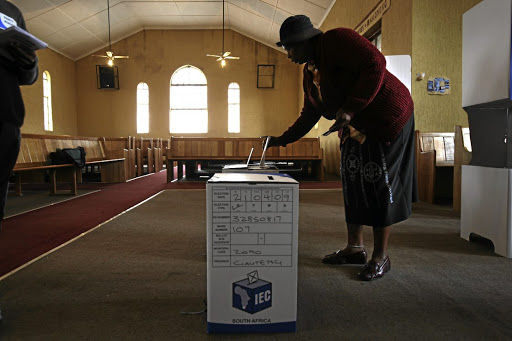 Democracy in action as a voter casts her ballot in Alexandra, Johannesburg. Picture: GETTY IMAGES/JOHN MOORE

In a postapartheid era that has been increasingly marked by government corruption and deteriorating delivery of public services, yet with few consequences for electoral support patterns, the question does arise as to whether reform of the electoral system could produce better accountability.

Since 1994 SA has been governed through proportional representation. In this system public representatives account directly to party bosses for their jobs and not to voters. Their function as public representatives, who should exercise oversight over the executive, has been undermined as MPs shy away from holding their political seniors to account.

But there is an opportunity for change on the horizon: in June 2020 the Constitutional Court found that the Electoral Act was unconstitutional because it does not allow for independent candidates to contest national and provincial elections. The Bill of Rights gives everyone the right to stand for election. But as it stands, only political parties can contest elections.

When SA embarked on its first democratic election in 1994, the model of proportional representation stood out as the most suitable because of its inherent qualities of simplicity, fairness and inclusivity. The proportional representation system was, however, intended as a provisional arrangement to enable the peaceful transition of power from the NP to the new majority party, the ANC. The Electoral Act required a revisiting of the voting system, which was done by the Van Zyl Slabbert Commission. However, the status quo remained.

After the Constitutional Court judgment, home affairs minister Aaron Motsoaledi set up a ministerial action committee of eight members to advise on changes, providing a new opportunity to revisit the system.

The committee completed its work in mid-June and has submitted its report to the minister. It contains two options for electoral reform, both hybrid forms of proportional representation and constituency-based representation.

The process will then have to move to parliament for the law to be changed by the Constitutional Court’s deadline of June 2022.

Will an amended electoral system deliver greater accountability to voters? As SA already has a hybrid system in place at local government level, where political representation and accountability is arguably at its weakest, will electoral reform make much difference?

Electoral reform can have unintended consequences, such as xenophobic and extreme parties winning power
Opinion
1 month ago

LETTER: No-one expects electoral reform to be a silver bullet