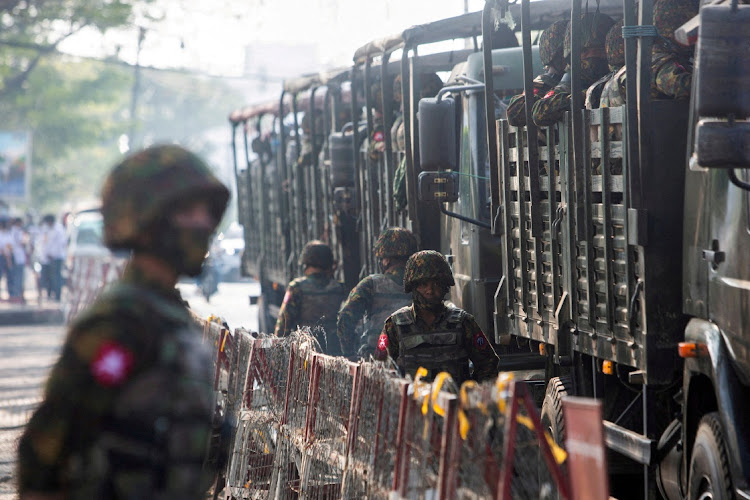 Soldiers stand next to military vehicles as people gather to protest against the military coup, in Yangon, Myanmar, in this February 15 2021 file photo. Picture: REUTERS

I refer to your article on the executions in Myanmar (“Global outcry over execution of Myanmar activists,” July 25). The most prominent of the four, Kyaw Min Yu aka “Ko Jimmy”, and his wife, Nilar Thein, herself an activist and former political prisoner, were dear friends of the late SA journalist and media trainer Hugh Lewin and his partner, Fiona Lloyd, also a media trainer.

It was through their work in media training that they met and befriended a number of Burma’s most prominent democracy activists, including Kyaw Min Yu and Nilar Thein. Lewin’s famous prison poem, Touch, and acclaimed prison biography Bandiet struck a chord with them.

When Kyaw Min Yu and his comrade, Phyo Zeya Thaw, were sentenced to death, I sent a letter by courier to SA’s international relations and co-operation minister raising their plight, along with Kyaw Min Yu’s SA link. I mentioned further SA links such as the late archbishop Desmond Tutu’s longtime support of Burma’s democracy struggle and that two of the Burma Campaign UK’s patrons have strong anti-apartheid movement links (these are Lord David Steel, president of the British anti-apartheid movement in the 1960s, and Roger Lyons, a founder of the British anti-apartheid movement, who was responsible for Nelson Mandela’s very first international honour.

I called on SA to raise its voice and demand that the planned executions not be carried out. I never received a reply. Similarly, for three years in a row, I have written a letter to the minister on January 27, the anniversary of the liberation of Auschwitz and Holocaust Remembrance Day, calling for SA to join the case at the International Court of Justice in The Hague for the Rohingya who face genocide. I have never received a reply.

Junta spokesperson says the men executed were not activists, but killers, who deserved their punishment
World
3 weeks ago