LETTER: Resignations of De Ruyter and Oberholzer would be disastrous 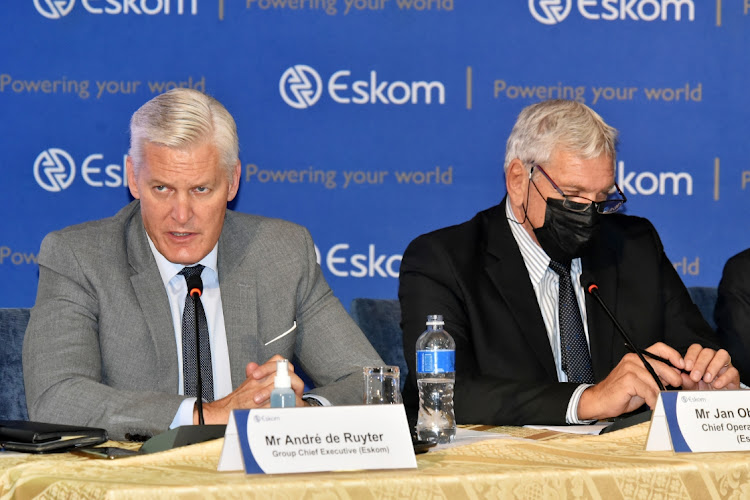 Increased load-shedding attracts opinions from various quarters, with inevitable calls for top management to step down (“It must be lights out for inept Eskom honchos,” July 4).

Duma Gqubule quotes performance figures, comments on unplanned maintenance ratios and uses these figures as a part of his argument that Eskom’s chair and CEO must immediately step down. He joins certain business associations and opposition political parties who continually make the same cries for top management change without offering informed, reasoned argument for why this action should be taken.

The resignations of CEO André De Ruyter and COO Jan Oberholzer at this time would be disastrous. What is continually overlooked is that the current management team inherited a disastrous situation, with Eskom having had 10 CEOs in 10 years.

Gqubule neglects to comment on the ANC government’s role and its refusal to allow Eskom to increase generation capacity in the late 1990s, and that from 2007 the generation margin declined, preventing Eskom managers from setting aside sufficient plant for maintenance.

He also fails to take into account that Eskom’s’ coal-fired generation fleet is on average 41 years old, and we know from detailed reports that these plants have been run hard and not properly maintained. He also does not comment on the debacle surrounding the Medupi and Kusile coal-fired power station projects, which have both failed to achieve their planned levels of performance and reliability due to plant design and maintenance inefficiencies.

He also fails to comment on the historic lack of urgent action to accelerate new investments in renewable energy independent power producer projects by the mineral resources and energy minister, who according to new reports has been sitting on an inappropriate Integrated Resource Plan. De Ruyter has repeatedly said Eskom urgently needs at least 4,000Kwh-6,000Kwh of additional energy to allow sufficient generation margin for an effective planned maintenance programme.

Gqubule then makes the statement that “Eskom decided to play politics and blame its employees for the blackouts.” This is a strange claim considering there were extensive reports in the media of protests and vandalism at a number of power stations.

There is no question that Eskom is short of experienced engineers, since many experienced staff with engineering backgrounds have left over the past 15 years, some apparently because of the actions of criminal syndicates and others because they were uncomfortable with the working environment.

Gqubule has not advanced cogent reasons for why such a complex organisation, with the government as the sole shareholder and with the potential conflict between the Companies Act and Public Finance Management Act, will benefit from being placed in a “power engineering (or technical) version of business rescue”. Nor does he set out how a consortium of engineers (local and international) would operate “to stabilise the fleet”.

SA cannot afford weeks and months of blackouts, and both the government and the mineral resources and energy minister urgently need to show greater leadership.

We must accept responsibility and act to repair power supply, Ramaphosa tells ANC

DUMA GQUBULE: It must be lights out for inept Eskom honchos