Things may still get worse before they get better 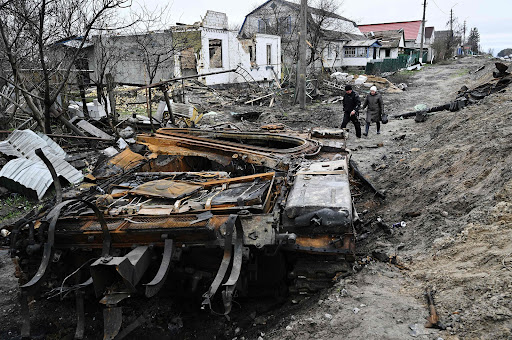 The effects of economic sanctions against Russia are increasing as the war drags on. The fact that Russia is currently running a trade surplus is not so much because it still exports commodities, but because it has difficulty importing commodities due to the effectiveness of the sanctions. Russia cannot buy what its citizens need, specifically not what they need to build tanks and other military equipment destroyed in the war.

Russia is poised to lose this war of attrition. It will need time to get around the effects of sanctions and time is not on its side. My reading from the outset was that Vladimir Putin will not be willing to negotiate before he reaches his minimum goals or can declare some sort of victory. He has already had to scale down his original aim of invading Kyiv and replacing the government with a puppet regime, thus getting control over the whole of Ukraine. When that did not materialise, in typical Putin style he bombarded Mariupol and other areas to rubble, like he did in Syria and Chechnya.

The time for negotiations to stop the war expired long ago. However, with sanctions hurting and world opinion loaded against Russia, Putin may well be obliged within the next few months to get to the table in an effort to formalise the military gains, which he will try to describe as necessary in the interests of Russia and pro-Russian elements in Ukraine, which he nurtured over time.

However, unless he scales his original intentions down drastically, I doubt that Ukraine, supported by its allies, will accept that. That would either prolong hostilities or ensure that sanctions against Russia remain in place for a long time.

I stated from the outset that Russia may win some battles, but it has already lost the war. Russia has become a pariah nation and its economy is seriously weakened. In contrast, Nato is united and stronger than ever. Instead of making Russia stronger, Putin has already succeeded in weakening the country internally and internationally. It will take years for Russia to regain its pre-war standing, if ever.

The cost of the war is soaring by the day, not only for Ukraine and Russia but globally. Things may still get worse before they get better. Meanwhile there are strong rumours that Putin is a very sick man — and not only mentally.

SA, which gained its freedom with the support of the family of nations, chooses to remain neutral while the freedom of Ukraine is trampled on
Opinion
1 month ago

LETTER: Africa is aware of the West’s double standards

Human Rights Watch keen to censure individual cases, but loath to call out global transgressions
Opinion
2 months ago
Next Article