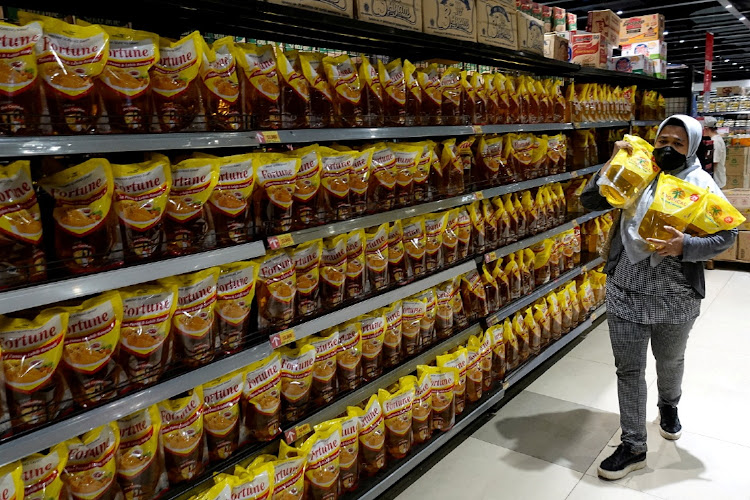 A woman shops for cooking oil made from oil palms at a supermarket in Jakarta, Indonesia. File photo: REUTERS/WILLY KURNIAWAN

A ban on agricultural exports is never desirable, especially by a major player in agricultural markets. Unfortunately, such practices have been common since the start of the Covid-19 pandemic, and more recently the Russia-Ukraine war. We have seen this through the temporary curbs on wheat and rice exports as global prices increased and countries attempted to protect domestic consumers.

Recent cases were a ban on palm oil exports by Indonesia and India’s decision to curb wheat exports. After these policy decisions we saw a surge in global vegetable oil and wheat prices, hurting developing nations most.

Against this background I found the article in Business Day on the subject most welcome ("Indonesia resumes palm oil exports”, May 20). Indonesia accounted for 54% of global palm oil exports in value terms over the past five years, and a continued ban on palm oil exports would have had profound price implications for the global vegetable oils market.

For SA these developments would have had severe implications for both prices and supplies in the coming months. SA is a net importer of palm oil to the tune of an annual average of 450,000 tonnes over the past decade. Of that volume Indonesia accounted for 66%, with the remainder imported from Malaysia.

With exports resuming we can now at least know there will be supplies of vegetable oils, though prices will remain elevated for some time. This is because of the reduced production and destruction caused by the Russia-Ukraine war on the sunflower oil supplies.

Domestically, we need to find ways to continue boosting vegetable oils production — mainly sunflower oils and canola. The higher global agricultural commodity prices and abrupt trade interventions by various nations are likely to be with us for the foreseeable future.

Even with the positive development in Indonesia some analysts still worry that there could be interventions that might disrupt exports again in future.