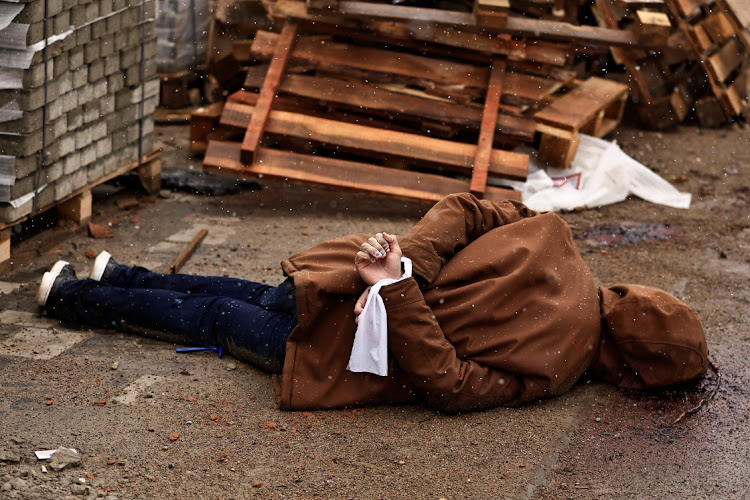 A body with hands bound by white cloth lies down in the street in Bucha, Ukraine, April 3 2022. Picture: ZOHRA BENSEMRA/REUTERS

Over the years, former gold dealer and banker Terry Crawford-Browne has proven to be somewhat of a jaded crusader against war — that is, an opponent of militarism whenever it suits him (“Nato is responsible for the consequences of Russia-Ukraine war,” March 31). Thus, while he opposes Western arms deals under the rubric “Economists Allied For Arms Reduction” and especially local arms procurement, he has often ended up supporting the stratagems and policies of foreign dictators and autocrats.

Crawford-Browne rose to fame on the coat tails of the Anglican Church's sanctions campaign against apartheid, and then proceeded to oppose the controversial realignment and hardware acquisitions of the new government and SA National Defence Force. The result was that, along with Patricia de Lille, Crawford-Browne was given a platform to pursue a political agenda that has involved, inter alia, promoting Hamas and  Putin’s Russia.

That judeophobia and denazification make for strange bedmates can be seen by Crawford-Browne’s latest scurrilous attacks against US President Joe Biden at the same time as he promotes a pro-Vladimir Putin narrative, which has been thoroughly debunked by news organisations, including Deutsche Welle.

Crawford-Browne claims: “Biden, then as vice-president, orchestrated the 2014 Maidan Revolution ‘regime change’ in Ukraine, in which the US ‘invested’ $5bn.” He then goes on to infer that the position of the president’s son, Hunter Biden, on the board of an obscure gas company, Burisma, is untoward and indicative of this conspiracy. Yet it is a minor scandal in US politics according to Vox — one that deserves to be compared to the equally stricken Nord Stream 2 deal between Putin and Germany.

Though money was certainly spent by the US state department and NGOs that had government grants, the result is far from an “orchestration of events”. Not only was the money “over the table” and not in the least bit clandestine, the financial help to organisations committed to the development of civil society and democracy occurred over the course of many years .

For instance, at the US-Ukraine Foundation Conference US under secretary of state Victoria Nuland specified $5bn in aid since 1991, which is a far cry from the latest story being touted by Crawford-Browne, who is not simply the author of conspiracy stories involving arms dealers and intelligence operatives but a peddler of blarney, and a litigant held in contempt of court for defaming Trevor Manual, among others.

Crawford-Browne found an opportunity to repeat many of the lies being touted by Putin apologists in his latest oped. For example, the 2014 Russian invasion of Crimea was merely a “secession”, so no actual invasion occurred. It was the Azov battalion, (a Ukrainian militia formed in response to the creation of pro-Russian militia after Putin flooded Eastern Ukraine with arms) who are responsible for the breakaway move, he says, since they are in reality “Nazis flying Nazi Swastika flags” — an anti-Jewish menace behind the “deaths of 14,000 Russian-speaking Ukrainians in the Donbas region”.

There is no source provided for any of this, nor even a vague consideration of the deaths of either Ukrainians and Russians, whether Jewish or gentile, in Putin's latest military invasion, which has resulted in 4-million refugees and displaced persons, and is certainly not restricted to the Donbas.

While the Azov adoption of a nationalistic symbol once associated with the Waffen SS drew criticism from Israel at the time, resulting in the battalion being absorbed into the regular Ukrainian army, the result is far from the picture of white supremacy painted by Crawford-Browne, who is himself white.

A statement by 250 scholars of genocide, Nazism and World War 2 rejected the “Russian government’s cynical abuse of the term genocide, the memory of World War 2 and the Holocaust, and the equation of the Ukrainian state with the Nazi regime to justify its unprovoked aggression”.

“This rhetoric is factually wrong, morally repugnant and deeply offensive to the memory of millions of victims of Nazism and those who courageously fought against it, including Russian and Ukrainian soldiers of the Red Army,” they said.

‘We know of thousands of people killed and tortured, with severed limbs, raped women and murdered children,’ Zelensky says
World
2 months ago

German Chancellor Olaf Scholz says the West will agree to more sanctions in the coming days as carnage by Russian forces, including corpses in the ...
World
2 months ago
Next Article