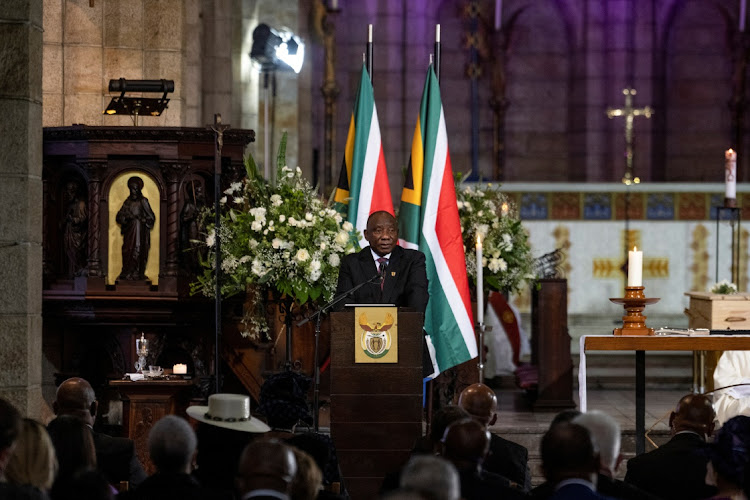 The challenge issued by former first lady Graça Machel at the Old Granary celebration of the life of Desmond Mpilo Tutu contrasted vividly with the eulogy to the Arch that President Cyril Ramaphosa delivered at his funeral on New Year’s Day.

Machel asked the world to be the change those of goodwill wish to see; Ramaphosa pointed a finger at the tyranny of apartheid (“unjust, illegitimate, repressive” — as it was) without apparently noticing the three fingers pointing back at his administration.

Many living in SA today who are poor, unemployed, unemployable, hungry and short of water, sanitation and electricity must surely feel they are being unjustly treated. The proliferation of service delivery protests gives expression to their feelings.

Those who go to provincial hospitals only to die; those who attend schools without books, proper toilets and teachers who are willing to teach; those who squat in crowded peri-urban shacks, vulnerable to fires and floods, must all feel repressed.

Others, who owe the political office they hold to the use of misappropriated public funds purloined by the ANC-led alliance to finance their unfair election (over opposition politicians who raise funds legally) should have cause to ponder the legitimacy of their success as they account for the effect of the “commissions” in the arms deals, the loot of state capture, the dividends and the profits in the Hitachi Power Africa deal on the fairness of successive elections.

These malfeasances affect the overall trajectory of constitutional democracy, integrity and merit in SA. Most pertinently of all, those who enjoy the fruits of their corrupt activities with impunity as state capture, kleptocracy and grand corruption continue unabated, must surely know that what they have done is unjust, illegitimate and repressive. Why else organise an attempted insurrection?

Ramaphosa has reportedly indicated his willingness to fall on his sword rather than expose to the criminal justice administration, such as it is, the illegal use of public funds in ANC internal elections. Until genuine efforts are made by the government to address our grand corruption pandemic in every one of its manifestations, all other maladies in SA will continue until service delivery is strangled by the impunity of the corrupt.

Let’s all hope that the year 20-Tutu will be the year in which steps are taken urgently to effect the necessary reforms and allocate the necessary resources to counter corruption before that malady “graduates into something terminal”, as the chief justice has warned.

Acting “diligently and without delay” is what the constitution requires of the government. The Arch, had he lived longer to see the actual implementation of these long overdue reforms, would indubitably have responded, with that irrepressible chuckle, “Wonderful, wonderful!”

Mourners from across the world will remember the late Archbishop Emeritus Desmond Tutu at an official state funeral held at the St. George's ...
National
2 weeks ago
Next Article