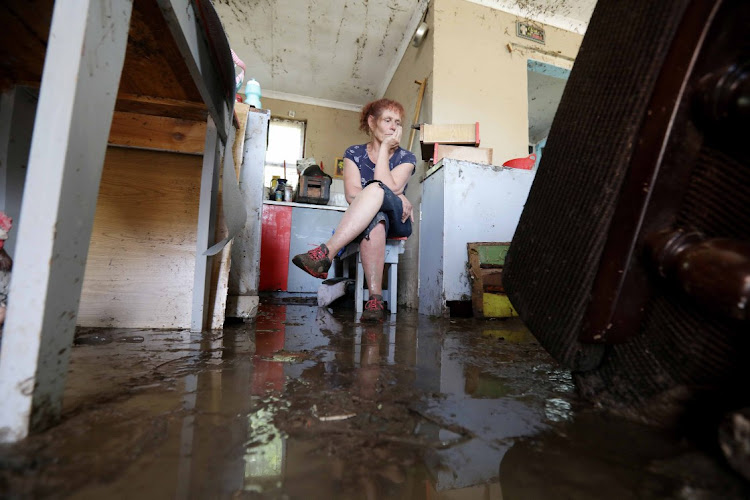 54-year old Estie Stander of Hope Street in George said, they had to swam out of their house following the flood on Monday morning. Most of her belongings were damaged during the flooding on November 23 2021. Picture: ESA ALEXANDER/SUNDAY TIMES

There have been flash floods in parts of the country recently. This phenomenon happens in a very short time and is caused mainly by climate change.

The flash floods were coupled with heavy hailstorms, which left a trail of damage to property and injuries to people and animals. Plantations were destroyed due to heavy rainfall.

The department of water & sanitation acknowledges that the rainfalls that have drenched most parts of the country are positive in that they have raised water levels in rivers and dams. However, this improvement is bittersweet due to the accompanying destruction of property.

The public is advised not to participate in any form of water activities in strong-flowing rivers and at isolated dams. There is a strong current in the water and there might be dangerous debris.

It is understandable that changing weather patterns, with switches from normal temperature to extreme heatwaves, cause people to seek places where they can cool off. Children look for pools in rivers but this could be dangerous, especially if they are unsupervised.

In addition, children playing in water increase the risk of drowning. The department calls on parents and community members to refrain from engaging in situations that could be detrimental to their lives.

The department also calls for those who practice baptisms or traditional ceremonies in rivers to be vigilant as the water level in some rivers is still high.

School excursions at places where there is water should be undertaken with extreme caution, particularly after heavy rains.

Water is a powerful force, and it should not be taken lightly. In areas that are affected by flash floods extreme caution should be taken at all times.

Let us practice a culture of safety around water resources and even in our swimming pools. Death and injury because of drowning can be avoided.