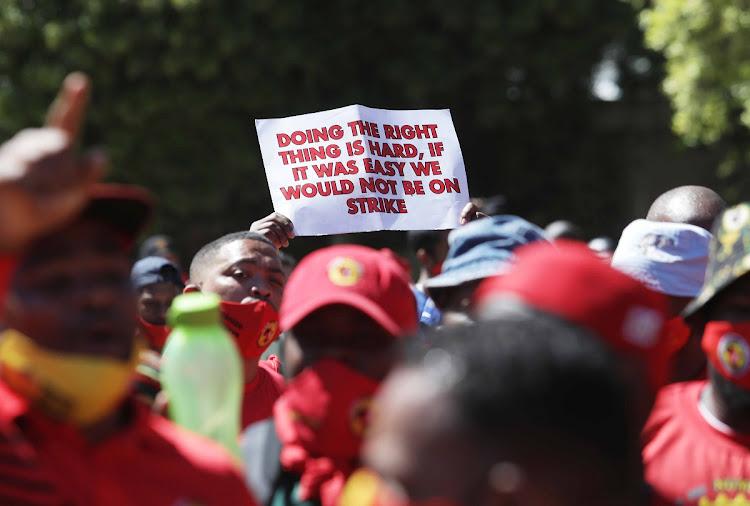 Workers affiliated with the National Union of Metalworkers of South Africa during their strike for better wage increases at the Bellville South community centre in Cape Town on October 5 2021. Picture: SUNDAY TIMES/ESA ALEXANDER

Irvin Jim’s indefinite steel industry strike is consistent with his Marxist Leninist beliefs. Their author, Stalin, was after all the man of steel. But the National Union of Metalworkers of SA (Numsa) and Jim have identified the wrong enemy.

A repeat of 2014 will drive many survivors into bankruptcy, meaning fewer jobs for Numsa members. Those still employed in the hospitality industry would embrace a 4% increase, but to Jim and Numsa it’s an insult.

The real enemy, of course, is the ANC government with its 18% duties on imported hot rolled steel to protect ArcelorMittal SA. Removing these tariffs would make local fabrication businesses competitive, increasing profitability and subsequently wages. But Jim’s philosophy prevents such an understanding. Numsa may no longer sit alongside the ANC, but capitalist business will always be the bigger enemy.

I hope Numsa members realise what their strike will achieve. Not a socialist nirvana but rather poverty and hunger as businesses close, automate or invest elsewhere. They must just study the achievements of previous Marxist-Leninist luminaries such as Stalin, Mao Zedong and Pol Pot.

Numsa to go ahead with strike after talks collapse