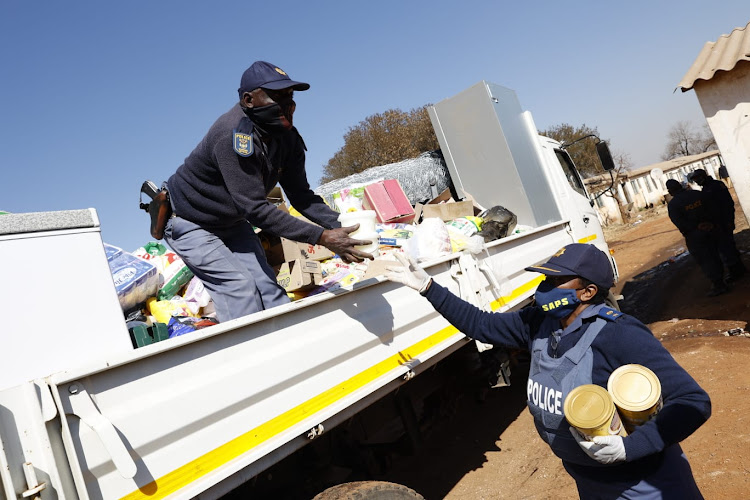 I find it hard to express my rage at the images of police raiding the houses of poor people in Vosloorus for looted goods, which were loaded up onto huge police trucks and carted away — ostensibly for the purposes of “evidence” in future prosecutions.  The same police who were invisible when the looting occurred.

Is the evidence going to be wheeled to court and unloaded for inspection by the courts? This “evidence”, we are informed, will be burnt thereafter. Every aspect of this is outrageous. Raiding the houses of those who were urged to loot by known members of the “radical economic transformation” faction of the governing party. Confiscating the loot for the dubious purpose of evidence. And finally, burning the goods. No further questions after burning.

Hardly a living soul in the country believes the police will really burn the evidence. Far more likely that they will make private use of it. As this spectacle is diffused on TV channels across the country, most citizens are furiously aware that not a single crook in the state capture saga, which began in 2009, has been convicted and locked up for the theft of billions of rand, which has had a disastrous effect on all the citizens of the country, especially the poor.

The more things change, the more they stay the same.

LETTER: Smokescreen to keep our people out

Well maintained, safe roads will improve agri-tourism, the delivery of farm-fresh produce to urban markets and the creation of rural jobs
Opinion
1 month ago

LETTER: Beware the ‘coup’ as a means to election theft

The recent unrest was a threat to civil rights, but so too is any attempt to use it as a reason to postpone elections
Opinion
1 month ago
Next Article

KHAYA SITHOLE: After the July jolt, the state couldn’t afford a public sector ...

KHAYA SITHOLE: After the July jolt, the state couldn’t afford a public sector ...