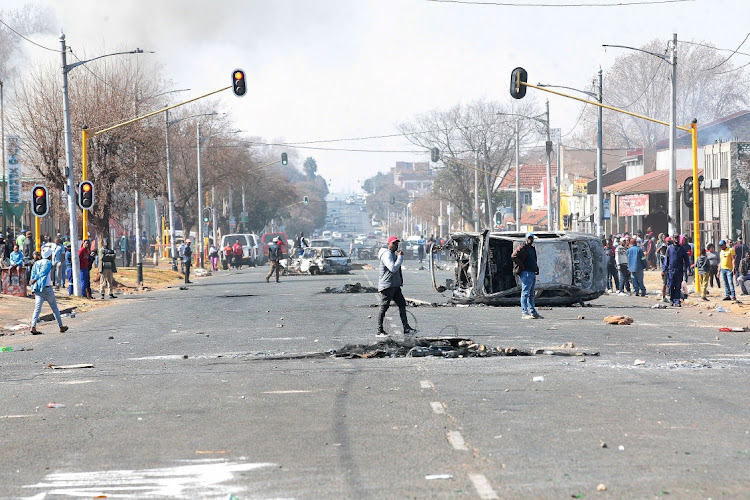 Torched vehicles are shown in Jules Street, Johannesburg, amid protests in response to the imprisonment of former president Jacob Zuma. Picture: VELI NHLAPO

I feel sorry for President Cyril Ramaphosa. On top of the Covid epidemic he now has to deal with widespread unrest. He should bring out the dogs and shotguns, but of course he can’t.

The problem is the emasculation of the police and security departments over many years, leading to their current impotence. Police minister Bheki Cele, in trying to justify the police inaction, said on Tuesday that the police are “geared for times of peace”. God help us.

A state security spokesperson, challenged over the total lack of preparedness, said they “just handed information over to the relevant authority”. Everyone is running for the hills. After two decades of putting political appointees into key government positions the chickens are coming home. Even the military seems in two minds as to which master it is serving.

It is clear that anything less than a root and branch review of those entrusted with our safety will leave the country exposed to violent episodes well into the future.

LETTER: Legal principles that shape our civilisation are never ‘mere’

It was unfortunate, not to mention frightening, to read the phrase in Jacobs’s letter
Opinion
11 months ago

Our divided country should react graciously, as humiliating reactions could be counterproductive
Opinion
11 months ago