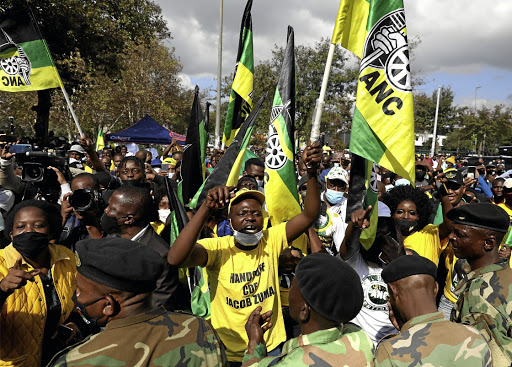 With the eventual removal of Jacob Zuma to jail, kicking and screaming, the official responses from the ANC were illuminating.

Speaking on behalf of the national executive committee, deputy secretary-general Jesse Duarte reflected that “we love and respect him” and “hope he wins” his case in the Constitutional Court.

This was followed by ANC spokesperson Pule Mabe, who referred to Zuma as a “brave man” to have made a “hard decision” to hand himself over to the police, and wished him well in prison.

This man is not an ordinary man, but a former president who reduced the SA economy to junk status, oversaw a huge surge in unemployment, befriended the Guptas and facilitated the theft of an estimated R500bn from the fiscus, hollowed out state-owned enterprises, oversaw the demise of the education and health sectors, fired talented MPs and hired incompetents and lackeys, abused not only the constitution but the Constitutional Court, and tarnished the image of a once great country in the eyes of the world.

This is a man who is “loved and respected” by the ANC, and who “deserved to win” his case against the Constitutional Court?

A former president who could not wait for his “day in court” but who has been ducking and diving from the time fellow thief Schabir Shaik went to jail?

A man who had in effect eight days to hand himself over to the police but only submitted to them at the 11th hour when a phalanx of police vehicles was lined up at Nkandla?

These are the actions of a “brave man”, Mabe?

Proud South Africans should not be surprised — these are the standards by which the ANC governs.

Application to rescind the watershed verdict will take centre stage, while vaccination registration for ages 35-49 begins on Thursday
Politics
10 months ago

Amid the upheaval, as the corrupt flee and flare up, we must stick to what is right and good
Opinion
10 months ago