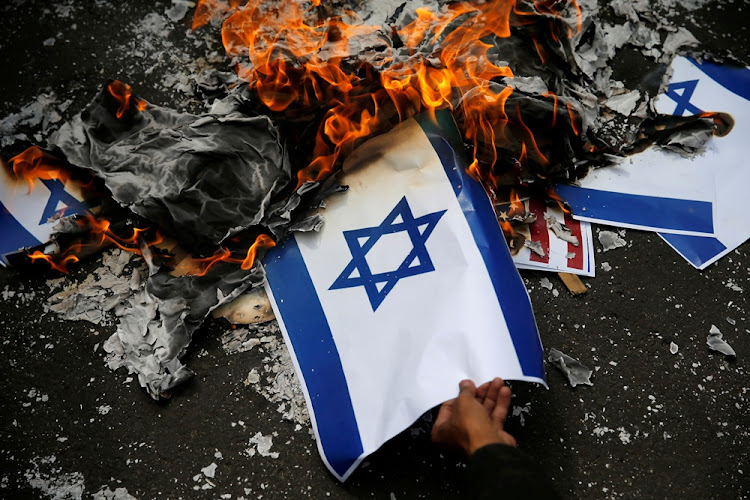 A protester burns a picture of an Israeli flag. Picture: REUTERS

The recent spate of similarly worded pieces by David P Kramer in a letter to Business Day (“David Unterhalter on trial for past affiliation”, April 21) and David Saks, published the day before in Politicsweb that referred to a previous post by Kramer, are shoddily researched and tendentious, to say the least.

They claim it is ironic that I was a signatory to the SA Boycott, Divestment, Sanctions (BDS) coalition’s letter to the Judicial Service Commission objecting to Unterhalter’s potential appointment to the Constitutional Court. Our objection was on the basis of his position on the SA Jewish Board of Deputies (SAJBD), which he only vacated the month before his interview.

The letter writers state that Isie Maisel, a Jewish lawyer, defended my father, Dr Yusuf Dadoo, among the 156 treason trial defendants in 1956. Maisel also served on the SAJBD and SA Zionist Federation. The “irony”, according to Saks and Kramer, is that I would therefore have similarly objected to the man that helped ensure an acquittal for my father and the other detainees and saved them from the death sentence.

Had Saks and Kramer bothered to verify the information they probably found on Wikipedia they would have discovered that my father was not a defendant in the treason trial. What is ironic, however, is that my mother’s maiden name was Kramer, so maybe David P Kramer and I are long-lost cousins! She, a SA Jew, was like my father a lifelong anti-apartheid activist in the SA Communist Party, and thus an internationalist and anti-Zionist.

I make this point to demonstrate exactly what the SAJBD does not accept: not all Jews are Zionists. If the SAJBD is truly representative of the entire SA Jewish community, and not only those who support the state of Israel, then I would like to know who on the board is representing the significant anti-Zionist Jewish community in our country?

This week Human Rights Watch (HRW) published a damning report demonstrating that Israel’s actions against the Palestinians constitutes apartheid. The HRW report examines concretely how Israel fits this definition. It is extremely significant that both HRW, a globally renowned NGO, as well as the Israeli human rights organisation B’Tselem, have this year come out clearly against Israeli apartheid.

Saks notes Maisel's bravery in defending members of our liberation movement against the apartheid state even though this impacted negatively on an otherwise distinguished legal career. I very much hope that Maisel, had he been alive today, would have been brave enough to once again stand on the right side of history and join the jurists prepared to speak out against Israeli apartheid.

I am proud that my parents actively supported the struggles for liberation in SA and Palestine and publicly opposed the increasingly brutal system of repression and subjugation of apartheid until the end of their lives. If Saks and Kramer understand the meaning of irony, they will concur that there is nothing ironic in me doing likewise.

If apartheid in SA was unacceptable to the international community back in 1977, why should it be imposed on Palestinians in 2021?
Opinion
1 month ago

LETTER: Compare Israel to the US, not SA