Like Jacob Zuma, the US president is now fighting to avoid ending up in jail 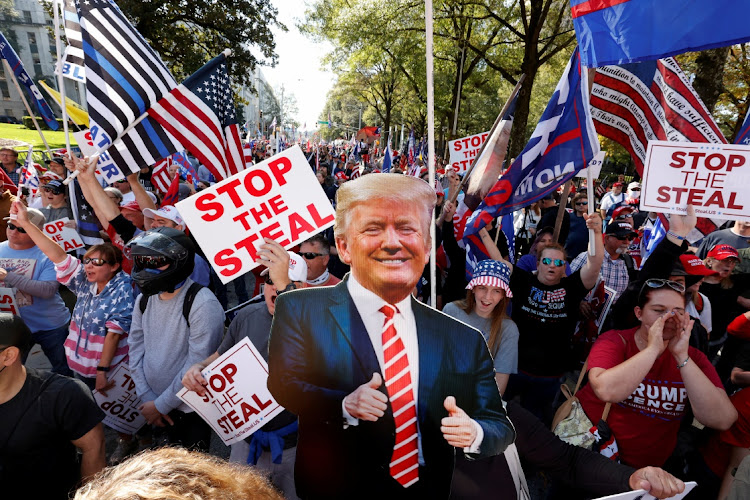 A poster of US President Donald Trump during a pro-Trump march in Atlanta, Georgia, the US, November 21 2020. Picture: REUTERS/CHRISTOPHER ALUKA BERRY

Donald Trump was a disaster many of us saw coming from day one. But he is now history. He is desperately clinging to something he never deserved. He is willing to implement a scorched earth policy to spite those who did not vote for him and make it difficult for those who will take his place.

He will not succeed. The American people rejected him. American institutions are too strong. Joe Biden will become president. The world is already welcoming him.

Trump will over time disappear from the limelight and from the stage he does not want to leave. He has blood in his hands. Like Jacob Zuma, he is now fighting to avoid ending up in jail. History will judge him very harshly.

Trump will be remembered as one of the worst presidents in the history of the US, who divided his nation like never before and caused the deaths of tens of thousands of Americans because he simply did not care. He will be a mere footnote in history and an interesting case study for history students as an impeached, one-term president.

We  should all just take a deep breath and relax. The nightmare is nearly over. Focus on the better things in life.

Judge issues a scathing opinion, likening the challenge to Frankenstein’s monster, in one of the highest-profile blows to president’s fight to ...
World
10 months ago

For some Americans, Trump not only won the election he’s the only person and true patriot they trust, with civil war not ‘off the table’
World
10 months ago

SA and all its parties should note the reasons Trump lost, as well as the gains he made for his party
Opinion
10 months ago