EDITORIAL: Government must act to keep the show on the road 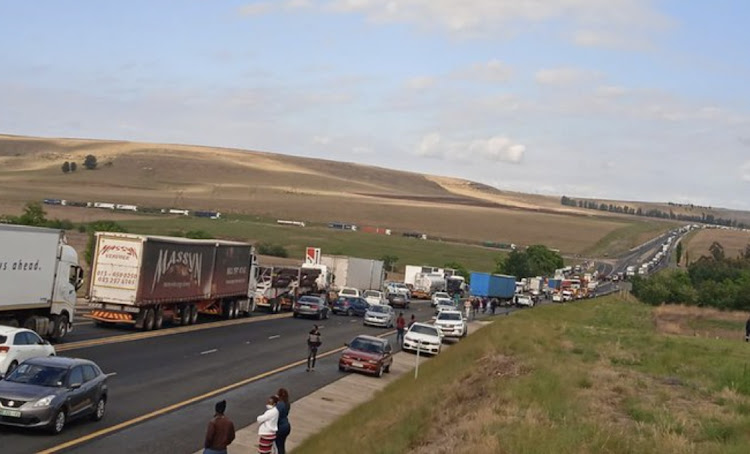 Trucks block the N3 in KwaZulu-Natal, in this undated picture: Picture: SAPS/ TWITTER

The N3 toll road should not be as important as it is. That the 590km road, which connects the port city of Durban with the economic heartland in Johannesburg, is so crucial a cargo corridor is in part because SA’s rail service has long been so poor.

Almost all freight moves by road in SA because Transnet Freight Rail cannot operate efficiently and much of that freight moves along the N3, which carries key imports and exports and is at the centre of the supply chain for strategic goods such as fuel.

Given how crucial the N3 is to SA’s supply lines, one might expect that keeping it secure and free flowing would be a priority for government. Disturbingly this seems not to be the case — as last week’s 24-hour-long closure of the road showed yet again.

Last Thursday’s blockade of the N3 by thug truckers protesting against the employment of foreign truck drivers came two days after an earlier incident. The closures have become a frequent occurrence. During last July’s violence in KwaZulu-Natal the N3 was shut for the better part of a week before the government responded to pressure from business to secure and open it. The damage to SA’s trade with the outside world was considerable. The disruption to supply chains for staple goods and key inputs cascaded through the economy.

But the Road Freight Association had to implore President Cyril Ramaphosa to intervene before action was taken. It has made it clear the whole supply chain is under attack, charging that the established road freight companies that comply with the rules have been targeted under the pretext of “foreigners taking our jobs”. Likewise Business Unity SA had last week to call on the president to act to address the crisis — as it has consistently done for some time, pointing too to the “deafening silence” from transport minister Fikile Mbalula.

Mbalula did belatedly speak on the crisis. But it is not clear that he has the interests at heart of the established road freight industry, which carries the bulk of SA’s crucial cargo. Certainly he has not made it clear that he considers the protesters to be thugs and criminals. Nor has he or the president promised to bring the full might of SA’s law enforcement agencies to bear to tackle the crisis.

Instead, Mbalula has been engaging with home affairs minister Aaron Motsoaledi and labour minister Thulas Nxesi to address the issues; he has been engaging too with stakeholders, with the emphasis apparently on the concerns of drivers and of small trucking companies.

More worrying is that the transport minister has suggested he wants to introduce new regulations to control the road freight industry, including operator licences which the Road Freight Association has pointed out resemble the old apartheid era licences that were required when government was trying to force companies to use rail rather than road to transport their goods. The Road Freight Association has pushed back arguing its members comply with all regulations.

On the upside, Mbalula and his colleagues have sat down with the freight industry to negotiate an agreement that will see the government and industry work together to address the roads crisis and that will hopefully bear fruit in coming months. Better intelligence and law enforcement would be key to it doing so.

Meanwhile, the government needs to step up the pressure on Transnet to address the operational issues that plague the rail lines to and from SA’s ports, preventing exporters especially in mining from getting their goods to market and robbing SA of valuable foreign exchange.

Transnet CEO Portia Derby now wants to buy another round of new locomotives. But another shopping spree is no substitute for fixing the existing fleet of locomotives — nor for fixing the operational and security crises causing the dysfunction of SA’s rail infrastructure.