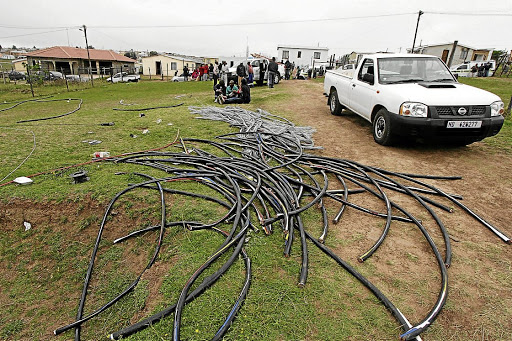 More than 150m of heavy-duty electrical cables worth about R100,000 seized in Mxhwele township in Mthatha. Picture: DAILY DISPATCH

On any given day, City Power, an energy services agency of the City of Johannesburg metro, has technicians out and about replacing a network of wires and cables that feeds electricity from substations to many of its suburbs.

Transnet is seeing a dramatic acceleration of the more than decade-long trend to strip away power cables and even railway lines, recording a more than tenfold jump in the amount of overhead cable lost over the past five years. This undermines its role in an economy that should be counting on its supply chain infrastructure in the form of a railway network, cargo trains and ports.

Eskom, Telkom, MTN and Vodacom have also fallen victim to the lawless cancer that has corroded almost every layer of SA industry and threatens to eat away at President Cyril Ramaphosa’s plans to revive economic growth through reliable infrastructure, and recast SA as a safe destination for badly needed private capital.

The financial cost to individual companies is huge. Karen Pillay, acting head of security at Eskom — which already survives on government bailouts as its income is not enough to pay down its crippling borrowings  — said last week the power utility suffers about R2bn in losses to cable theft every year, and the combined total for all state-owned companies is about R7bn.

It’s not an insignificant amount but it does not tell the whole story. The indirect cost to the economy is many billions of rand more as the problem reinforces perceptions in corporate boardrooms that SA cannot guarantee reliable infrastructure for shareholders to rally behind new investments in mines or distribution warehouses.

With so much at stake, it is no wonder policymakers are floating ideas, some of which seem to lack tact, to tackle what has long been acknowledged as a priority crime. One that appears to be gaining traction, and was recently brought forward by public enterprises minister Pravin Gordhan, is to ban exports of all scrap metal.

It might look seductive. For starters, restrictions on scrap metal exports introduced in 2012 under which dealers must first offer their product to domestic consumers at a discount to the international price before being granted an export permit have done virtually nothing to contain operations believed to be conducted by organised crime syndicates.

Furthermore, as Neva Makgetla wrote in her Business Day column last week, quoting figures from the SA Revenue Service, SA now exports more raw copper than it produces and imports — four times more than department of mineral resource & energy data shows. There are several reasons the existing measures are failing but chief among them is that once a scrap dealer buys stolen copper, they can melt it down and turn it into ingots and granules, making it difficult to trace the origins.

To break the chain of the crime one needs to ban exports of scrap metals, proponents of the idea argue, including trade, industry & competition minister Ebrahim Patel. But it would be a mistake to apply such a heavy-handed approach as it would punish legitimate dealers, and the ban could create a thriving black market. The unintended consequences of the ban on the sale of alcohol and cigarettes in 2020 should be a cautionary tale for policymakers.

It will not be easy but it will help to protect legitimate dealers if policymakers could make it difficult for criminals to sell stolen copper by requiring certification of the source of copper purchases, and making it an offence to have a smelting facility without a permit. The industry also needs a ban on cash payments for scrap, as has been done in other countries. This would create a form of audit trail and make it more difficult for the thieves to obtain hard cash for their stolen metal.

Yes, our first port of call is to strengthen our law enforcement agencies’ ability to be more proactive, and to throw resources at the problem by creating a special unit that will go after the big fish criminal syndicates driving demand for stolen copper cable. SA has a crime problem rather than a trade policy problem.

Both sides adopt tough positions as negotiations begin, but the government and unions need to find a way to provide a better public service
Opinion
1 week ago

The Fed, among other central banks, has made a U-turn on policy
Opinion
2 weeks ago

The ID is under growing pressure to win cases, and do so soon
Opinion
2 weeks ago

Security cluster ‘ready’ for any eventuality in KZN

Security cluster ‘ready’ for any eventuality in KZN