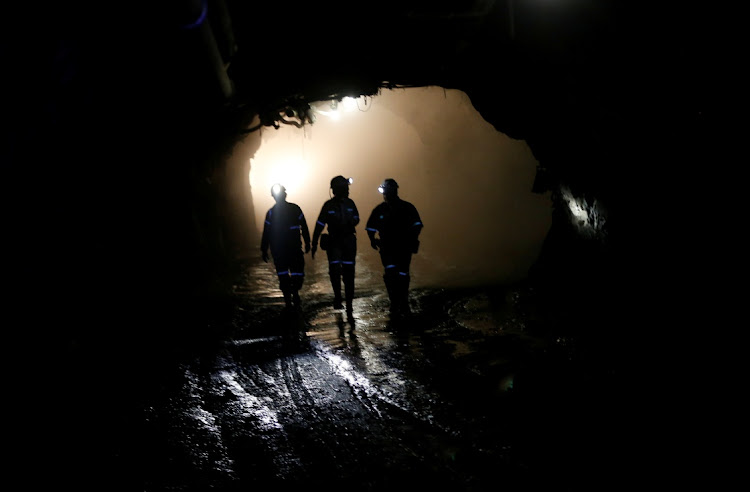 Mine workers are seen under ground at Cullinan mine, near Pretoria in this February 1 2019 fiele photo. REUTERS/SIPHIWE SIBEKO

It seems the department of mineral resources & energy is not going to be diverted by the courts in its pursuit of transformation.

It plans to introduce amendments to the Mineral and Petroleum Resources Development Act (MPRDA) to give legislative effect to the controversial 2018 Mining Charter that the Pretoria high court ruled in September was a policy and not a law and therefore not enforceable. A suggestion was made by a high- ranking departmental official during a parliamentary committee meeting this week that the charter could be annexed to the act to circumvent the judgment. Sections of the industry feared this would happen when the judgment — hailed as a victory at the time — was handed down.

The department has decided on this route because it does not believe there is much chance of success in taking the well-considered judgment on appeal, which in any case could take years to finalise.

The amendments could reinstate the clauses of the charter making it legally obligatory for existing mining rights holders to achieve the procurement and supplier and enterprise development targets the court set aside and impose new obligations on new mining rights holders. Who knows what other amendments could be in store, and this possibility will just create a further prolonged period of uncertainty as to the future terms and conditions of investments until the amendments are made law. This could take as long as a year or 18 months.

Importantly, the court judgment gave unqualified recognition to the “once empowered, always empowered” principle that had been an issue of contention between the government and the industry, and which meant that mining companies would not have to top up their BEE shareholding on the sale or transfer of their BEE partner’s shares to retain their BEE status.

Existing mining rights holders were the main beneficiaries of the judgment insofar as it set aside the procurement and enterprise development targets of the charter. The department will, however, continue to have the power to enforce these transformative targets of the mining charter under the MPRDA in the terms and conditions of the agreements it enters into with investors. Sanctions can be imposed for non-compliance with these commitments.

Apart from the BEE shareholding requirements, the charter stipulated that in terms of procurement, 70% of the total budget on goods would have to be procured from local manufacturers, with 60% of the local content spent on the historically disadvantaged, women, youth and BEE-compliant companies. A total of 80% of the services budget would have to be supplied by these groups and 70% of the research & development budget spent on SA-based entities.

The court judgment removed the obligation on existing rights holders to increase their BEE shareholding from 26% to 30% upon the application for the renewal or transfer of their rights, as well as the procurement, supplier and enterprise development targets for both existing and new mining rights holders. New mining rights would have to have a minimum 30% BEE shareholding but the 5% carried-interest distribution for communities and employees respectively, as well as the benefit accruing to host communities, was also set aside.

All these aspects set aside by the court could be reintroduced by way of legislative amendments. But amending the law might not be the end of the story as it is likely that the constitutionality of such amendments — especially if they are made retrospective — would be challenged in the Constitutional Court, further prolonging the dispute over the mining charter, which has already lasted several years.

As has been demonstrated so vividly in the past policy, uncertainty is inimical to the investment, economic growth and job creation this country so desperately needs. And as the chair of parliament’s mineral resources & energy portfolio committee, Sahlulele Luzipo, pointed out, the department’s opting to go the legislative route as opposed to reaching an outcome through negotiation with stakeholders was regrettable as it would create distrust and a lack of harmony.

STUART THEOBALD: Policy digs us into a hole instead of helping SA mine private investment

If an enabling approach to mining was pursued, we could see change in fixed capital formation
Opinion
7 months ago