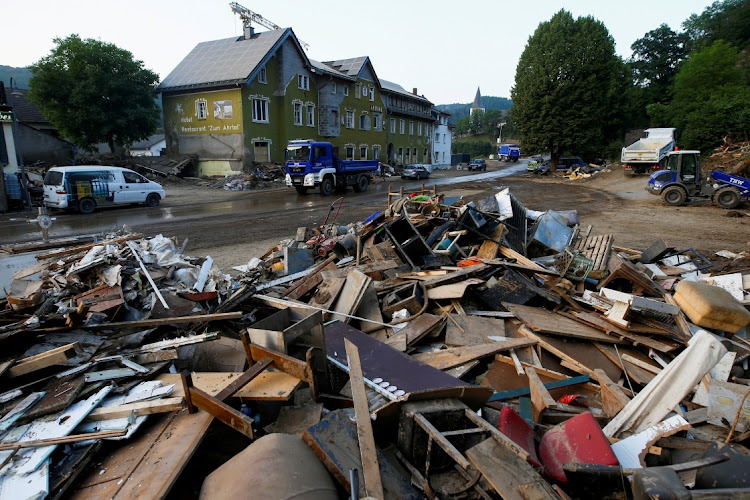 Debris are seen in an area affected by floods caused by heavy rainfalls in Schuld, Germany on July 20 2021. Picture: REUTERS/THILO SCHMUELGEN

For South Africans, last week will be prominently remembered for the unprecedented violence and looting that swept through KwaZulu-Natal and parts of Gauteng, leaving a trail of destruction in its wake.

But in Western Europe an equally devastating, though natural, disaster gripped the region when abnormally heavy rains triggered flash flooding at such a scale that it claimed 195 lives in Germany and Belgium.

But it is not just Western Europe that has been affected by a “summer of extremes”, as it has been referred to by the World Meteorological Organisation, which points out that parts of Northern Europe have been gripped by an enduring heatwave, while unprecedented heat in western North America has triggered devastating wildfires.

This week in China the central part of the country is experiencing the worst flooding in a millennium with the death toll reaching 18 and 200,000 people displaced as the rain continued to pour down on Wednesday.

According to the World Meteorological Organisation, one simply cannot separate these events from the man-made phenomenon of global warming and climate change, caused by the release of greenhouse gasses into the atmosphere.

While fires and flooding are as old as the planet itself, there is evidence that global warming has led to an increased severity of weather events, as well as a higher frequency of extreme weather events.

While governments and corporates conveniently will continue to drag their feet on appropriately cutting emissions, opting for a compromised approach that does not affect economic activity and profits, they might want to consider those scenes from Europe last week and indeed even SA  — where poverty and unemployment play a large role in the riots — and which may offer a taste of what is to yet to come.

The impact can already be seen. Madagascar is suffering its worst drought in four decades and, according to Time magazine, is faced by the first famine in modern history to be caused by climate change alone.

According to a draft report by the UN’s Intergovernmental Panel on Climate Change that was leaked to the media last month and reads like a doomsday prophecy, climate change is expected to fundamentally reshape life on Earth in the coming decades.

Even if humans can rein in greenhouse gas emissions in the coming years, millions of people worldwide still face a calamitous future. The draft report warns of “progressively serious, centuries-long and, in some cases, irreversible consequences”. Among the accelerating climate impacts pinpointed by the draft report are species extinction, more widespread disease, intolerable heat, ecosystem collapse and rising seas.

The authors note that those living along coastlines almost worldwide could experience multiple climate calamities at once — from drought to heatwaves, cyclones, wildfires and flooding.

As SA and indeed the world lurches from one disaster to the next, having to mop up the devastation each time, we would do well to keep an unwavering focus on reducing global emissions in a now very ambitious bid to arrest global warming.

Time has run out and only decisive action will now do.

The visceral fear in July 2021 has seemed similarly intense to that of April 1993 – but objectively viewed, we were in a very different and more ...
Opinion
9 months ago