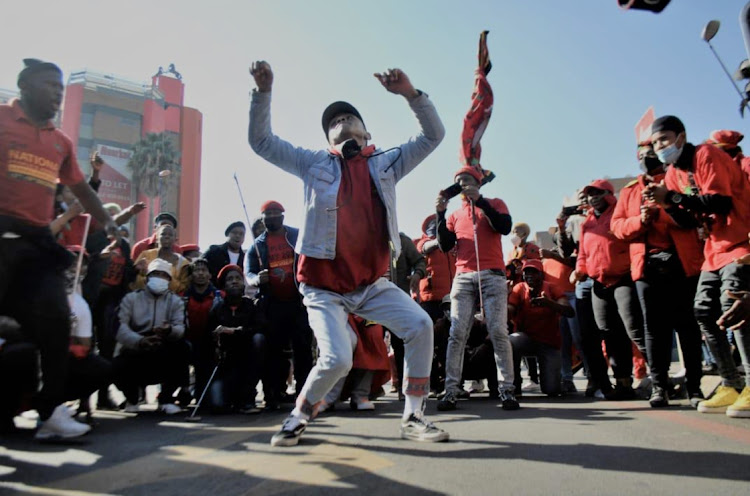 We watched in dismay when thousands of people, singing and waving flags, marched through the streets of Pretoria to demand the approval of Covid-19 vaccines by the regulator.

Organised by the EFF, the demonstration was meant to pile pressure on the SA Health Products Regulatory Authority (Sahpra) to give the thumbs-up within seven days to CoronaVac and Sputnik V vaccines, for which registration documents were filed in March and February, respectively.

CoronaVac is made by Sinovac Biotech, a Beijing-based pharmaceutical company that has won supply contracts in several countries such as Chile and Indonesia, and the Sputnik V shot is widely used in Russia and approved for use in more than 60 countries.

The EFF’s thoughtless march on Friday came weeks after the World Health Organization approved CoronaVac, something that could have fallaciously emboldened party leaders to take to the streets to express wild conspiracy theories that Sahpra is bending over backwards for Western pharmaceutical companies.

It would be reckless for Sahpra to outsource its work to other bodies when it is staffed with some of the world’s best scientists to put the jab through a rigorous examination process to determine how far a vaccine would go in preventing transmission and severe disease requiring hospitalisation and death, among many criteria, before making a recommendation to the health department seeking to bolster its supplies.

“What we are also looking at as we make this recommendation, and increasingly so, is really trying to monitor the effectiveness of the vaccine particularly in the context of emerging new variants,” said Helen Rees, Sahpra chair at a news conference.

It is not unreasonable to imagine that Sahpra is also drawing on  the experience of other countries regarding the effectiveness of vaccines awaiting approval. Last week, more than 350 health workers who had been vaccinated with Sinovac’s vaccine in an area of Indonesia that has been hard-hit by the delta variant fell ill with Covid-19, news agencies have reported.

Any perception that an independent, science-based organisation such as Sahpra has cut corners or caved in to pressure from the EFF, a political party whose raison d'être is to win votes, will deal a huge blow to public confidence on the vaccine rollout strategy.

In an age of social media, it is easy for just about anyone to proclaim expert knowledge on everything from soccer to central banking. But it is one thing to spread unreliable information about one’s mistaken belief in whether Josef Zinnbauer’s tactics as Orlando Pirates coach are sound, and quite another when such information could lead to people losing confidence in vaccines, which have been scientifically accepted as our best way out of the devastating cycle of lockdowns and death.

The worst thing about the EFFs demonstration, held under the banner “March to Save Lives”, is that it is reckless, cheap, political point-scoring aimed at affirming the party’s false sense of a moral superiority before the local government elections later in 2021.

There was no reason for EFF leaders to flout regulations that prohibit outdoor gatherings of more than 100 people. Supporters did not have to choose between fears over the virus and a false sense of duty to save lives.

EFF is not the first lobby group to level dangerous rhetoric questioning the independence of Sahpra. Earlier this year, AfriForum also launched an attack on Sahpra’s evidence-based stance on ivermectin, alleging that the institution was irresponsible, biased and abetting the destruction of lives.

“It is essential that Sahpra, as a statutory body, is insulated from untoward political interference and protected from the threats that have recently been levelled against the organisation and its members,” a dozen scientific bodies, including the Infectious Diseases Society of SA and SA Medical Research Council, said in joint statement last week.

We could not agree more. We have complete trust in Sahpra as a science-based regulatory authority that does not care if the cat is black or white as long as it catches mice.

Politicians should step back and allow this constitutionally mandated public health institution to independently weigh the benefits of medicines against harm before approving them for use.

Platforms from online food delivery to classifieds delivered a 54% revenue jump, almost twice as much as that of Tencent
Opinion
7 months ago

Thousands of jobs will be created, billions in taxes will flow to the Treasury and the fuel import bill will be slashed
Opinion
7 months ago
Next Article