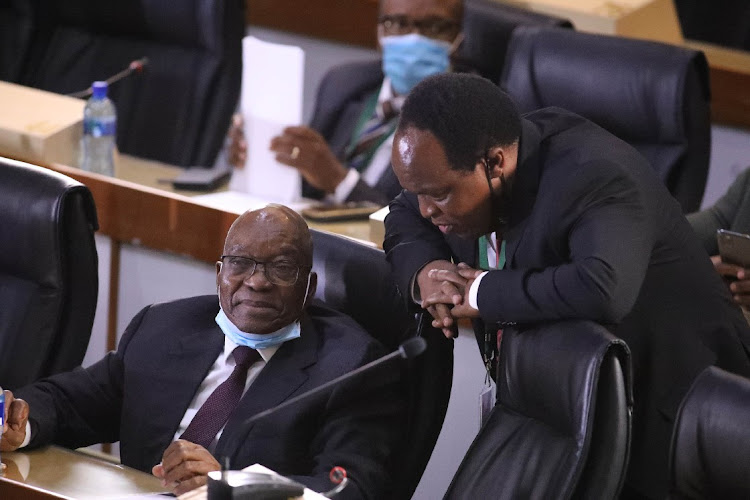 In the end, deputy chief justice Raymond Zondo was left with no choice. Though most people would want the circus about former president Jacob Zuma’s appearance at the state capture commission to be over, his decision to defy a legally binding summons could not be allowed to stand.

Since — and before — July 2019 when the former head of state used his appearance at the commission to make unsubstantiated claims about those who testified against him being former apartheid spies, it has been clear that Zuma had no intention of co-operating with the commission.

His strategy was obvious from the start: to discredit those who testified about the alleged grand corruption under his watch — mostly committed by his friends, the Gupta family — as head of state.

In his testimony earlier in 2019, former finance minister Trevor Manuel talked about how Zuma had essentially abdicated his responsibilities and detailed how, for example, Fikile Mbalula, now minister of sport, had been upset to hear from the Guptas about his elevation to the cabinet. That was not the only piece of evidence that showed what Manuel described as a “cavalier” attitude by Zuma towards duties prescribed for his office by the constitution. So his antics last week should not have come as a surprise.

It was clear that when he did eventually appear last week he had one intention, to cast doubt on the legitimacy of the commission and its chair, so that he would not have to answer any of the questions awaiting him.

And there are many. The application for Zondo to recuse himself, on legally dubious grounds, alleged a personal and family relationship that the judge flatly denied. Even if that had been true, Zuma failed to show how this could have led the judge to be biased against him.

It was all Trumpian, similar to the outgoing US president’s attempts to overturn an election that he lost, on the last count, by more than 6-million. His various legal efforts have failed and even his own lawyers, aware of the legal consequences of perjuring themselves, did not carry through with the argument. In contrast, with their role in this fiasco, Zuma’s legal team have not done their own reputations any good.

With that strategy failing, Zuma, who as head of state was the supposed guardian of the constitution, again decided he would give the nation, and the rule of law, the middle finger. Whether he was polite or not, as asserted by his advocate Muzi Sikhakhane, is neither here nor there. The fact that he excused himself without getting permission from the judge was against the law.

Having been overly lenient with Zuma over the past year, Zondo’s decision to have him criminally charged in line with the Commissions Act was the correct one. That legislation provides for anyone who defies an order to appear at a commission to face a fine and/or a prison sentence of up to six months.

Not withstanding the tactic of Zuma and his allies to turn legitimate action by law enforcement into a political spectacle in which they present themselves as persecuted victims, the police and National Prosecuting Authority must do their job.

As Freedom Under Law’s Nicole Fritz and others have noted, the principle at stake here is a simple one: that the law treats everyone equally irrespective of their position. It is even more disgraceful when it comes from a former head of state.

It is a long way from March 1998, when former president Nelson Mandela subjected himself over the appointment of a commission of inquiry into racism in rugby. The Constitutional Court eventually found that the Pretoria high court judge had erred not only in ruling in favour of Louis Luyt and the SA Rugby Football Union (Sarfu), but that it was also wrong to compel Mandela to testify.

The important point was that Mandela understood that he was not above the law and it never crossed his mind to defy an order to appear before a judge.

Of course, Zuma’s natural state is the opposite, and letting him get away with it would have just been another nail in the coffin for the rule of law.

Yet again, it will be the taxpayer who is on the hook
Opinion
4 months ago

LETTER: Act against Jacob Zuma as no-one is above the law

Criminal charges to be laid against Jacob Zuma over Zondo inquiry

Zondo will not recuse himself as state capture inquiry chair

Jacob Zuma can be charged for walking out of Zondo inquiry

LETTER: Act against Jacob Zuma as no-one is above the law

Criminal charges to be laid against Jacob Zuma over Zondo inquiry

Zondo will not recuse himself as state capture inquiry chair

Jacob Zuma can be charged for walking out of Zondo inquiry