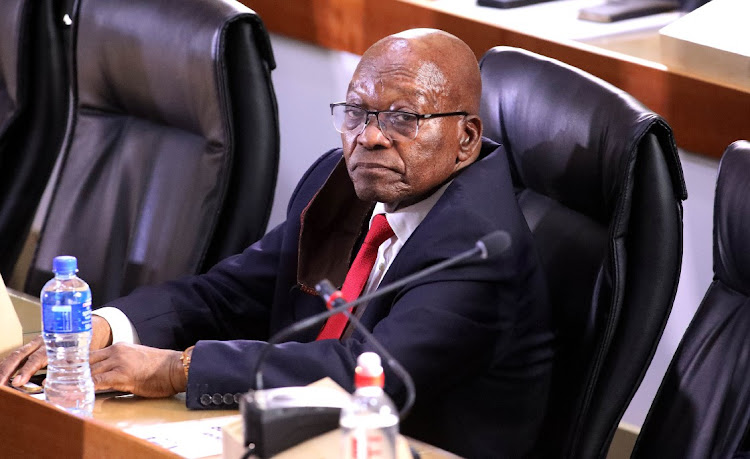 Asking deputy chief justice Raymond Zondo to recuse himself as state capture commission chair, just four months before the inquiry completes its work, is nothing more than an attempt to collapse the entire process.

Former president Jacob Zuma, after getting a small taste of the sort of questioning he might encounter at the inquiry, has spent more than a year trying to ensure that he does not find himself back in the hot seat.

At his first appearance at the commission in July 2019, Zuma used the opportunity to allege that some of his accusers had been apartheid spies. He was given unlimited time to make a statement to the commission during which he laid out an alleged 30-year plot to get rid of him and destroy him.

The former president on many occasions said that he does not believe there was state capture, and that the inquiry, which he set up, is politicised. This is the same argument he has made in his corruption case, which is expected to go to trial this year.

After Zuma delivered his statement to the commission in 2019, inquiry evidence leader Paul Pretorius started to question him. The former president all of a sudden could not remember what happened 10 years ago, gave vague answers and eventually accused the commission of cross-examining him. His lawyers stepped in and put an end to it, and since then it has been an uphill battle for Zondo to get Zuma to return.

But now with the commission due to wrap up, Zondo decided enough is enough and issued a subpoena for Zuma to appear this week and finally come and give his side of the story.

Zuma, legally, could not ignore the subpoena, so he tried to do the next best thing — collapse proceedings by trying to get Zondo to recuse himself.

A number of reasons have been given for wanting him to step down from the inquiry, of which none really seem to stick. They ranged from a historic family link, which the former president believed was the reason the judge was biased against him; the fact that the two men had a “close personal relationship”, which Zondo has flat out denied; and that comments made by the judge during hearings have given the impression that he thinks Zuma was responsible for state capture.

Zuma’s advocate, Muzi Sikhakhane, however, told the commission this week that the application for recusal was not about Zondo’s integrity. He highlighted that his client was basically unhappy with the environment at the commission where he was perceived to be the accused.

Sikhakhane questioned whether the inquiry took seriously Zuma’s concerns regarding the commission and the allegations he made and whether it had launched an investigation. Whether the commission should be wasting its time investigating political conspiracies is another thing.

But as Pretorius pointed out this week, the commission is not a court hearing and there is no accused.

True, Zuma is not an accused in public hearings meant to get to the bottom of what happened and come up with recommendations to prevent it from happening in the future. But to be frank, Zuma is front and centre in the state capture project, accused by multiple witnesses of draining the public purse to line the pockets of his friends, the Guptas.

Despite all this, Sikhakhane tried to persuade the commission that Zuma wanted to give his side of the story and that he did not fear the outcome of the inquiry, or whether findings are made against him. However, in the past year the former president has shown that he does actually fear the outcome — otherwise why carry on trying to derail the proceedings?

The National Prosecuting Authority’s investigating directorate is on a roll when it comes to state capture allegations. It is Hermione Cronje, head of the directorate, that Zuma should be scared of, not Zondo and the state capture inquiry.

EDITORIAL: Don’t rule out the Reserve Bank springing a surprise on Thursday

Many economists are predicting there will be no change in the rate, but 43% believe there is space for a cut
Opinion
5 months ago