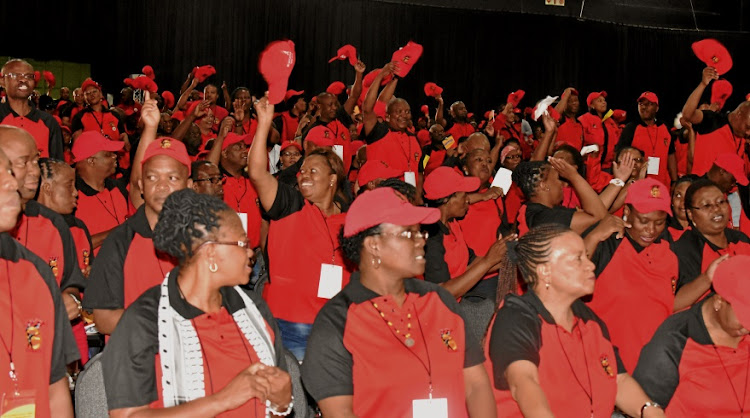 The one-day nationwide strike by thousands of state workers on Wednesday could not have happened at a worse time for SA, which is struggling to contain the economic fallout from lockdown measures to contain the Covid-19 pandemic.

Teachers, nurses, doctors and police officers took to the streets of Johannesburg and other cities to express their discontent at the government’s failure to honour a 2018 agreement to pay wage increases.

Led by Cosatu, it came as President Cyril Ramaphosa, business leaders and labour try to iron out differences over a plan to revive the economy, which shed 2.2-million jobs in the second quarter and contracted by more than 50% on an annualised basis. Having apparently agreed a recovery plan as part of the National Economic Development and Labour Council (Nedlac) process, this seems an odd time for one of the partners to take to the streets.

The dispute over wages erupted earlier this year when finance minister Tito Mboweni, facing up to a fiscal crisis that is partly due to previous reckless decisions that saw an unsustainable increase in the public-sector wage bill, pencilled in R160bn of cuts to the baseline wage bill over the next three years, implying pay freezes for 2020/2021 and below-inflation increases in the following year or two.

In June, with the world having been changed by the Covid-19 pandemic, Mboweni outlined further cuts to overall expenditure in the region of R230bn through to 2023. Even that will not be the end of it and the Budget Review warned of further cuts in the 2023/2024 year.

Predictably, workers are outraged at the plan. On Wednesday, some stayed at home while others took to the streets.

It does seem unfair for the government to try to back out of the deal simply because it has been thrown into a budgetary crisis. Workers are not responsible for the government’s reckless spending choices and corruption.

The ballooning wage bill is the making of many years of above-inflation increases agreed by the government, turning it into a behemoth that has been outgrown only by SA’s debt.

Even though Mboweni presents an unassailable logic about slashing the wage bill, reneging on agreed pay increases could set a bad precedent for collective bargaining as the government would be able to carefully single out parts of bargaining deals it wants to honour, as unions have argued in the court papers challenging the government decision not to pay annual wage increases in April.

Still, the budget crisis, which has been worsened by the economic fallout from the Covid-19 pandemic with the consolidated budget shortfall likely to widen to more than 15%, calls for an extraordinary act of sacrifice from 1.2-million civil servants if the country stands any chance of fixing its finances.

If Ramaphosa’s consensus-building skills fail to have the unions agree to forgo pay increases, the total bill will amount to about 60% of tax revenue for this financial year. That would mean there is even less money to spend on schools, hospitals, potholed roads and other creaking infrastructure, all of which are essential for growing the national income.

It is not ideal to back out of an agreement, but it would be an act of patriotism for workers to heed the appeal of Mboweni to cut back on pay increases in the public sector. Many have argued before that perhaps our civil servants should follow in the footsteps of workers in the private sector, who agreed to take deep pay cuts as the economy was being ravaged by the pandemic-induced lockdown measures.

Just as the millions of workers in the private sector have made pay sacrifices in recognition that their employers are fighting for survival, it is time for public-sector union leaders to realise that the government is staring down the barrel of the worst economic crisis since the 1930s’ Great Depression.

Just when we were mired in bad news, President Cyril Ramaphosa pulled off a hat-trick of wins
Opinion
11 months ago