The Canal+ stake, worth more than R3.2bn, demonstrates its confidence in the prospects of both MultiChoice and Africa 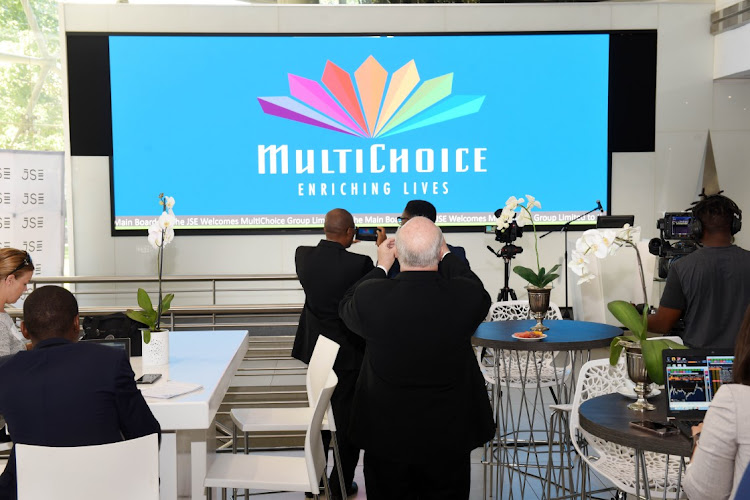 The listing of MultiChoice at the JSE in Sandton. Picture: FREDDY MAVUNDA

When Naspers spun out MultiChoice in 2019 as part of measures by CEO Bob van Dijk to release value trapped in the valuation gap between the e-commerce giant’s market cap and the sum of its parts, some analysts were prepared to say good riddance to an asset with a business model in irreversible structural decline.

Canal+, the pay-TV subsidiary of one of the world’s biggest media conglomerates, Vivendi, does not seem to buy in to that assessment. On Monday, MultiChoice, Africa’s biggest satellite pay-TV operator, disclosed, as required under JSE rules, that Canal+ has built up a 6.5% stake in it.

The news triggered speculation about what the French TV giant is up to, but judging by the share price reaction, investors reckon the deal will develop into a good thing for shareholders.

Shares in MultiChoice leapt more than 9%, booking their biggest one-day gain in four months and extending their winning streak to the ninth consecutive session, the longest since debuting on the JSE in February 2019. The stock added to those gains on Tuesday, picking up just over 2% in afternoon deals.

Predictably, MultiChoice declined to comment, but Canal+ said the acquisition of the stake, worth more than R3.2bn, is a long-term financial investment and demonstrates its confidence in the prospects of both MultiChoice and Africa.

It’s a sensible bet that gives the French company a foothold in the de facto pay-TV monopoly in Africa, boasting almost 20-million subscribers and steady cash flows generated from subscription fees of about R800 a month.

Granted, streaming services, such as Netflix and Apple TV, with original content and blockbusters such as The Last Dance and Queen Sono, have started to loosen MultiChoice’s stranglehold on the lucrative market.

According to a report by Digital TV Research, a London-based firm that publishes more than two dozen reports a year, streaming video subscriptions will increase nearly four-fold to 9.2-million in the next five years. Revenues will sky-rocket by almost six times to just over $1bn (R21bn).

Netflix, already the continent’s largest streaming services platform, with 1.41-million subscribers, is predicted to see a huge increase of 3.6-million subscribers to reach 5-million by 2025. Disney+ is not expected to launch in Africa until 2022, but is expected to have 1.37-million paying subscribers by 2025, the report by Digital TV Research released in January showed.

Over the same period, the number of pay-TV users in Sub-Saharan Africa is expected to increase by 54% to reach nearly 50-million, while revenues are expected to rise by nearly a third to $7bn. That’s a hefty six times more revenues than on-demand, web-based platforms will have.

Even with the cord-cutting trend of consumers ditching satellite TV in favour of over-the-top alternatives, one cannot escape the reality that satellite pay-TV companies such as MultiChoice will remain the providers of one of the primary sources of household entertainment on the continent, at least for the next few years.

Furthermore, MultiChoice is still miles more profitable than its closest rival, Netflix. Its operating margin — or the ratio of income to sales after paying costs — of about 30% puts that of Netflix in the shade. Netflix’s margin is about 13%.

Perhaps, in an implicit recognition of the dominance of satellite pay-TV on the continent for the foreseeable future, Netflix and Amazon Prime paired up with MultiChoice for the former to carry some of its content on its platform.

The idea behind the distribution deal is fairly simple: to help MultiChoice retain customers by giving them a wider choice of programmes and expose the Silicon Valley giants to audiences that are still hobbled by the slow internet speeds on the continent.

Even though the long-term outlook for the satellite pay-TV market is shaky in the age of smartphones and consumers demanding on-demand digital services instead of a week-long wait for the next episode of Succession, the Canal+ bet on MultiChoice and the continent should pay off, at least in the short term.

Just when we were mired in bad news, President Cyril Ramaphosa pulled off a hat-trick of wins
Opinion
11 months ago

SAA’s bailout is the forced reprioritisation of money from real pro-poor programmes, just to keep a failed airline alive
Opinion
11 months ago

These losses have, in all likelihood, given SA another unwanted record of groaning under the world’s highest unemployment rate
Opinion
11 months ago
Next Article