EDITORIAL: If only the ANC still had cadres like Andrew Mlangeni 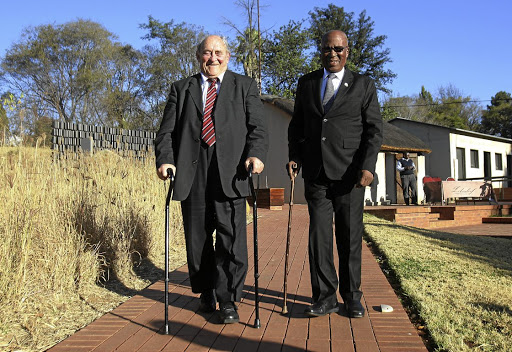 The death of the last remaining Rivonia trialist, Andrew Mlangeni, signifies the end of an era. It is a sad day, not only for his loved ones, but for a country for which he was willing to put his life on the line.

Mlangeni, accused number 10 in the 1963-1964 trial, was part of a group of liberation fighters — among them Nelson Mandela, Ahmed Kathrada, Govan Mbeki, Walter Sisulu and Denis Goldberg — who were jailed for more than two decades.

Goldberg’s death in April had left Mlangeni as the last living member of the group, something that President Cyril Ramaphosa noted when marking the latter’s 95th birthday in June. “Though we all felt sorrow at Bab’ Denis’s passing, we know it has been all the more difficult for Bab’ Mlangeni,” Ramaphosa said then. “We had become used to seeing them together at national days, rallies and other public events.”

While their huge contribution to the freedom of SA has been recorded in detail in the annals of history, it is the integrity with which Mlangeni and that generation of leaders lived their lives, even when it meant publicly condemning the rot that set in within the modern party, that is most admired. It makes one wonder where the so-called tradition of members not criticising the party publicly comes from. True patriots do the opposite.

Mlangeni was among a group of ANC veterans who bravely stood up and called for former president Jacob Zuma to be removed from the position as the nature and scope of the state capture project became apparent. Kathrada too was a vocal opponent of the corruption that defined the Zuma era. That was a stance he took with him to the grave, barring Zuma from attending his funeral.

Mlangeni, who Ramaphosa called Mr Integrity, was the chair of the ANC’s first integrity commission, established after the 2012 Mangaung conference at which Zuma was elected for a second term.

The conference delegates resolved at the time that “more urgent steps should be taken to protect the image of the organisation and enhance its standing in society by ensuring, among others, that urgent action is taken to deal with public officials, leaders and members of the ANC who face damaging allegations of improper conduct. The ANC can no longer allow prolonged processes that damage its integrity”.

Something happened soon enough to test the ANC. As events unfolded over the reinstatement of officials implicated in the collapse of VBS Mutual Bank, a looting spree that hurt the poorest, the party did not heed that call. It no longer has the level of cadre that speaks out against what is wrong, irrespective of party loyalty or discipline.

After 26 years and so many sacrifices, it is sad to think that Mlangeni and his friends and colleagues such as Kathrada spent the last years of their lives fighting against their own party.

On Wednesday, the foundation of another former president, Thabo Mbeki, explained what his death should mean: “The death of a stalwart like Andrew Mlangeni is more than just the end of an era, the passing of the last of a generation of freedom fighters who sacrificed so much for our freedom, but more importantly who never expected or demanded any special recognition or personal benefit. More than the passing of a generation, it also has to be the handing over of the baton to younger generations of patriots at a time when our country is in dire need of true patriots.”

In the tribute to mark Mlangeni’s birthday, Ramaphosa expressed the hope that the current leadership may “prove ourselves worthy of his support and confidence”. If he is honest, he will admit they are falling way short. The best way to honour that generation will be to show the same courage they did and get the country back on track.

Hamba kahle Andrew Mlangeni. We are forever indebted to you.

EDITORIAL: The Reserve Bank has the room to cut rates — and it should use it

Given SA’s dire economic situation, the Bank should err on the side of doing too much
Opinion
8 months ago