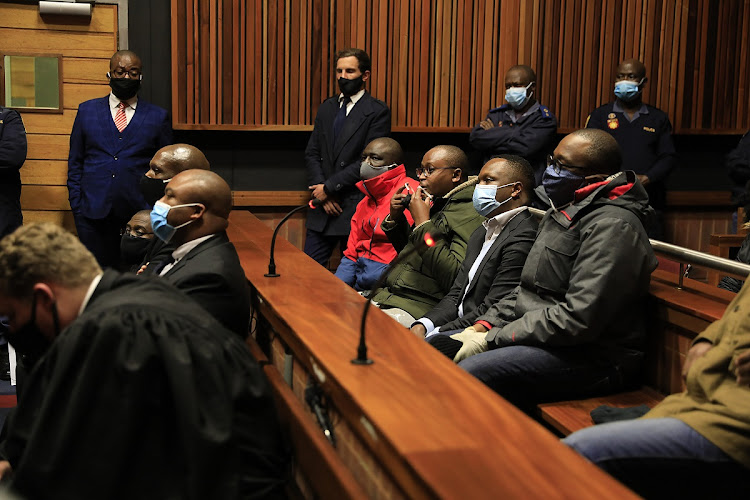 Seven of eight suspects appeared in court on Thursday in connection with the R1.9bn looting of VBS Mutual Bank. It was a small but important step by the head of the National Prosecuting Authority (NPA), Shamila Batohi, in ensuring that her agency is at the forefront of putting those behind an industrial-scale corruption behind bars.

In one of the country’s biggest banking scandals, VBS, which was thrust into the spotlight in 2016 after it advanced a loan to former president Jacob Zuma to pay back the state for upgrades at his Nkandla personal home, collapsed shortly after a Reserve Bank-mandated investigation found that dozens of people stole the money they were supposed to look after on behalf of municipalities, stokvels and the elderly in Limpopo.

The Wednesday morning arrests of the suspects that include former chair Tshifhiwa Matodzi, CEO Andile Ramavhunga and treasurer Phophi Mukhodobwane came just more than two years after Terry Motau released findings in a report that detailed a criminal enterprise perpetrated at the behest of executives and benefiting politicians who illegally deposited money with the bank in return for backhanders.

Others in the group facing 47 counts, including of racketeering, theft, fraud, corruption and money laundering, are former KPMG audit partner Sipho Malaba, who signed off on the bank’s falsified financial statements; two former representatives of the Public Investment Corporation to the bank’s board, Paul Magula and Ernest Nesane; and Phalaphala Avhashoni Ramikosi, board member and former CFO of the SA Police Service.

The eighth suspect, CFO Philip Truter, will appear in court after clearing a Covid-19 quarantine.

While it is good to see VBS senior rank in handcuffs, officials in municipalities — some representing among the poorest areas in the country — are also facing the music for losing roughly R1.2bn that they illegally deposited in the bank.

The scandal rightly prompted public outcry as it surfaced amid daily revelations from both Gupta leaks and later the Zondo Commission of a brazen patronage network in the state capture project that siphoned off billions from the public purse.

For Batohi, whom President Cyril Ramaphosa named in December 2018 to lead the NPA, it was never going to be easy to build watertight cases against those implicated in a flurry of corruption scandals, including those at VSB.

For one, she had to spend much of her time rebuilding the capacity of the agency, which did not escape the corruption cancer that corroded every layer of the government.

Not only did she have to root out those bent on undermining her effort to fight corruption and deliver justice, she also inherited an ill-equipped agency unsuited to successfully prosecuting high-level financial crimes. The NPA is still to charge anyone in relation to the huge fraud that almost brought down Steinhoff, even after an internal investigation found that group of executives used complex transactions to hide financial losses at underperforming subsidiaries.

Steinhoff, which first disclosed so-called accounting irregularities in December 2017, has since agreed to pay forensic auditors at PwC to help the law-enforcement agencies investigate itself, perhaps a sign that neither the Hawks nor the NPA have skilled staff or the resources to take on complex financial crime cases.

In the national budget in February, finance minister Tito Mboweni allocated R2.4bn to the NPA, the Special Investigating Unit (SIU) and the Hawks, acknowledging that law-enforcement agencies faced a backlog of cases and needed to appoint hundreds of investigators and prosecutors.

It’s not clear if these allocations will be revised down as money is diverted towards the government’s efforts to fight the Covid-19 pandemic and provide a cushion for companies and individuals.

Still, continued support for the NPA, the Hawks and SIU is crucial for Batohi to ensure the list of those in handcuffs extends beyond VBS’s senior management.

SA’s fiscal challenges are beyond the reach of technical solutions. They are deeply rooted in the ANC’s political choices
Opinion
1 year ago

EDITORIAL: From lockdown to living with the virus

As the economy is poised to open up further, one major sector — tourism — has been left behind
Opinion
1 year ago

They have never been needed as much as now, with many people working from home
Opinion
1 year ago
Next Article

Hawks and NPA to give details on VBS Mutual Bank arrests

Hawks and NPA to give details on VBS Mutual Bank arrests