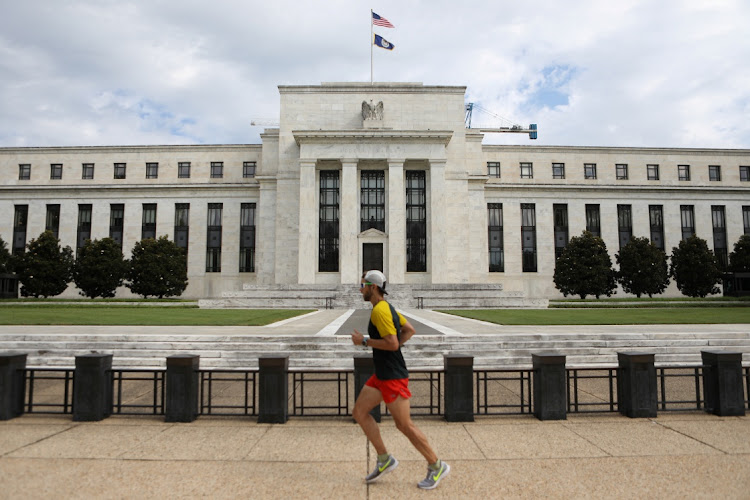 A jogger runs past the Federal Reserve building in Washington, DC, the US. Picture: CHRIS WATTIE/REUTERS

The highest inflation in decades is unravelling whatever policy consensus there was among major central banks since the great financial crisis. Global markets could buckle under resulting waves of stress and volatility.

The dollar’s surge to its strongest level in 20 years reflects how aggressive investors expect the Federal Reserve to be in raising interest rates and also how fragmented the global central bank landscape is.

While the US monetary authority appears strapped in for the most aggressive tightening cycle since 1994 in scale and speed, others are at various stages of the battle against inflation, and with varying degrees of appetite for the fight.

The Fed’s expected path stands in stark contrast to those of its three biggest peers. Central banks in Japan and China are still easing policy and the European Central Bank (ECB) will struggle with its plans to tighten amid recession fears from a Ukraine-related energy shock.

Whatever path major central banks follow, the burst of global inflation and fragmented policy response has put a fire under global market volatility — US Treasuries implied volatility is the highest since 2009 and global financial conditions are also the tightest in 13 years.

As analysts at Bank of America put it, two years of pandemic-fuelled quantitative easing to the extent of $11-trillion globally is ending and markets’ “volatility anchor” has been removed, threatening the disorderly moves in rates and currency markets that policymakers are desperate to avoid.

The dollar index, a measure of the greenback’s value against six major currencies, is the highest since 2002. Although it has risen rapidly this year and may be due a profit-taking pause, many analysts reckon it still has room to appreciate further.

A stronger dollar makes it more expensive to service dollar-denominated debt for overseas borrowers. According to Institute of International Finance estimates, well over $1-trillion of dollar debt held in emerging economies will mature by the end of 2023.

A rising dollar and US borrowing costs have slammed global financial markets — the S&P 500 just had its worst January-April performance since the 1930s, while US bond market volatility and Goldman Sachs’s global financial conditions index are the highest since 2009.

The additional problem policymakers face is essentially the irrationality and herd-like behaviour of financial markets. Once currency traders sense weakness or fracture, they go for the jugular, and market overshoots can worsen underlying economic problems.

ECB executive board member Isabel Schnabel in a March 17 speech nodded to the danger of allowing policy divergence to widen too much.

“A reaction function that differs materially from that of other central banks facing a protracted period of above-target inflation risks amplifying the energy price shock by weighing on the exchange rate, thereby adding to the burden on real household income,” she warned.

Chris Marsh, senior adviser to Exante Data and a former economist at the IMF, says the wide divergence can only continue for so long before other central banks have to follow the Fed.

“If the ECB and others don’t keep up, they end up importing inflation. And inflation is already very high. So to not keep up with the Fed will be very difficult for them,” Marsh said.

Producer price inflation has climbed to 11.9%, the highest it’s been since 2013
Business
3 weeks ago

Will Venezuela’s 3% dollar tax bring back the bolivar?