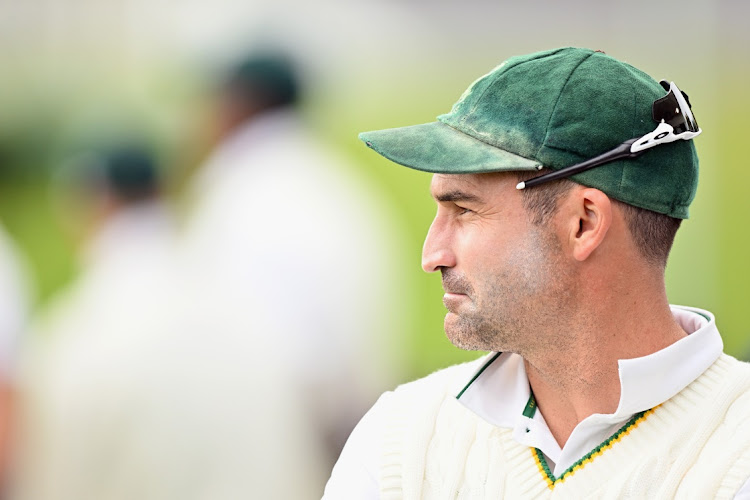 Captain Dean Elgar of South Africa looks on at the end of day five of the Second Test in the series between New Zealand and South Africa at Hagley Oval on March 1 2022 in Christchurch, New Zealand. Picture: GETTY IMAGES/KAI SCHWOERER

The most capped and most successful Test captain said after retirement that he took to the field with the starting XI of his choice in less than half of the matches in which he was the leader. Dean Elgar will have less than half the team he would have liked when he leads the Proteas in the first of two Tests against Bangladesh at Kingsmead on Thursday.

Whereas Graeme Smith had to accept negotiation and compromise with the selection of his team, Elgar has been fully compromised. Kagiso Rabada, Lungi Ngidi, Anrich Nortjé, Rassie van der Dussen and Marco Jansen would have been in the starting XI, with Dwaine Pretorius a contender for the all-rounder slot.

None of them chose to delay the start of their Indian Premier League (IPL) contracts by a fortnight to play in the Test series. IPL-contracted players from the Test squads of England, Australia and the West Indies chose to finish their country’s Test series before flying to Mumbai to join their franchises.

The English and Australian players certainly get paid far more than the South Africans but the West Indian players, such as the former captain Jason Holder, are paid less. Holder has spoken on numerous occasions recently about his desire to maximise his earning potential in T20 leagues now that he has passed 30 — but without giving up his passion for Test cricket in the Caribbean.

SA players’ union Saca insisted on a clause in its memorandum of understanding with Cricket SA that stipulates its members will automatically qualify for a “no objection certificate” from their employers if they are signed by the IPL. So, whereas a handful of SA players were denied permission to play in the Pakistan Super League earlier this year, Cricket SA cannot prevent anybody from going to India, Test series or not.

Australia’s recent victory against Pakistan has strengthened their position at the top of the World Test Championship (WTC) log and resulted in Pakistan dropping below SA, who have an excellent chance of strengthening their second place with two victories against Bangladesh. With their next series in August and September against an England team in disarray, the Proteas have plausible reason to believe they can contest the second edition of the WTC final — almost certainly against Australia.

So there is a lot at stake over the next two weeks. Far more, in fact, than a place in the Test Championship final. By declining to play Test cricket the players have made a deeply profound statement, which may have long-lasting consequences. A precedent has been set that can never be undone and the “primacy” of Test cricket, a foundation principle since 1991, can never be restored.

What happens when the squad needs to be selected in July for the tour of England? There will have been no first-class cricket played between the end of the domestic summer, at the beginning of March, for four months. Will the players be chosen on merit or reputation? How much weight will be afforded to the performances of the “replacement” players? Should they prevail against Bangladesh could they, should they be discarded?

On Monday Elgar sounded tongue-tied on the subject. “I’ve had conversations with the players and I’m comfortable with their answers,” he ventured.

What were their answers, given that none has spoken publicly?

“I’m confined to what I can and can’t say, but the players were put in a bit of a situation regarding their availability. It was unavoidable. They didn’t want to hurt their opportunities in that tournament,” he explained. Or not. “It’s an opportunity for others and we’ll have to make do with the players who are here ... the excitement and hunger levels are right up there.”

There are five fast-bowling options in the squad with Daryn Dupavillon a good bet on his home ground and Lutho Sipamla pushing his case after a good second Test against New Zealand. One of Lizaad Williams and Glenton Stuurman could share the new ball.

But there are also two very fine spinners — Keshav Maharaj and Simon Harmer — and both could play since Kingsmead has favoured spinners in recent years. “That option is very much open to us and we’ve had some very good chats about our best chance of taking 20 wickets,” Elgar said.

Khaya Zondo is set for a Test debut in the middle order, which will also see a return for Keegan Petersen on his new home ground after missing the New Zealand tour after a positive Covid-19 test.

There will be much to celebrate if the new crop of players can force a victory, but their performances will have to be truly exceptional for the series not to be remembered for a different landmark: the first time the Proteas Test cap was rejected, not by one player, but five.

NEIL MANTHORP: Time away from nets will benefit Proteas before second Test ...

NEIL MANTHORP: Time away from nets will benefit Proteas before second Test ...