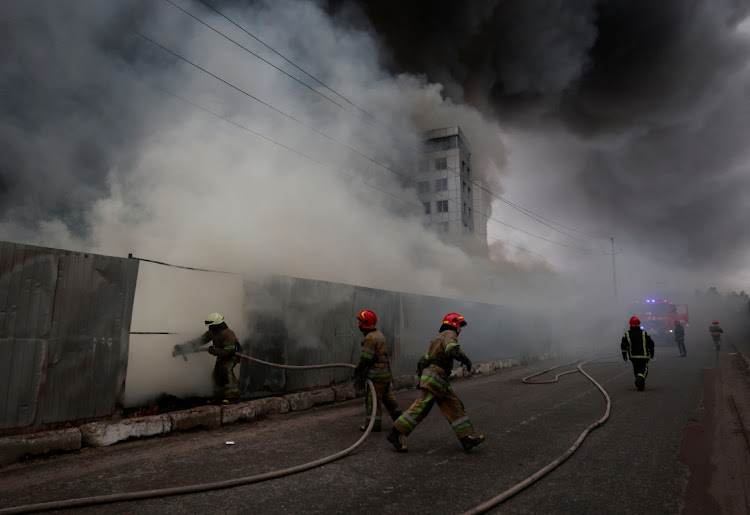 Firefighters extinguish fire at a warehouse after Russian shelling in the village of Chaiky, in the Kyiv region, Ukraine, March 3 2022. Picture: SERHII NUZHNENKO/REUTERS

Without immediately grasping why, for me the most arresting visuals to come out of Ukraine last week were those contained in contrasting videos posted by civilians in Russian-occupied Melitopol.

The New York Times told readers it had verified videos posted on Thursday that “reveal the various ways” residents of Melitopol “are coping with the presence of foreign troops in their city”.

The paper went on: “Civilians have responded with a mix of anger, scorn and acceptance, with locals protesting Russian troops on multiple occasions and others lining up for aid from them in a central square.”

One video showed hundreds of civilians dauntlessly advancing on Russian soldiers, shouting at them to go home, and showing mild hesitation when the cautiously retreating soldiers fired repeated bursts into the air.

In other videos civilians are shown queuing to receive food and basic necessities being handed out from the backs of large trucks by Russian troops. What was it that made this footage so vivid and significant, for me at least?

The first reason, I think, is that the visuals help to muddle the narrative, or at least call into question the conviction that the Russian invasion can be whittled down to two essentials: mindless and brutish insurgents versus brave and implacable resisters. On-the-ground history is never as straightforward, even if a sane judgment of Vladimir Putin’s despotic instincts likely can be. Part of the lesson might be that “Putin” is not “Russia”.

The perhaps more important reason is that, taken as a sum, the footage illustrates the complex human scale of events too often assumed to be incapable of being understood except in the high-sounding terms of strategy, politics and ideology (and the icy reason or burning emotion that go with them).

Here, instead, we are confronted by somewhat unexpected, often contradictory choices and actions (on both sides, needless to say) that, when we think about it, are by and large true for all people who — especially but not in moments of crisis — must constantly reappraise the tension between being the subjects of their histories and the agents of their fate.

If this makes it seem an ordinary, perhaps even normal, aspect of being human, I can’t help being reminded of the recently encountered epigram writer Damon Galgut uses to frame his powerful and unsettling 2021 Booker Prize-winning novel, The Promise. One senses in it the author, filmmaker Federico Fellini’s, puckish delight: “This morning I met a woman with a golden nose. She was riding in a Cadillac with a monkey in her arms. Her driver stopped and she asked me, ‘Are you Fellini?’ With this metallic voice she continued, ‘Why is it that in your movies there is not even one normal person?’”

Doubtless, taking the trouble to look closely — whether introspectively, or at the passing parade — can be counted on to dispel any certainty in who or what is normal.

Yet sharpening the focus on the smallest denominator of humanity — the individual person — is properly an abiding liberal preoccupation because, history suggests, individuals being free to act in their fuller interests are inclined to make choices, working in concert where necessary, that offer the most effective deliverance from the baser routines of aggression, hostility and retaliation that promise deeper error and worse atrocity.

The events in Melitopol are not proof of it, but they do seem worth elevating into the loftier conversation about a regional conflict that one can’t help feeling is somehow being held back from being an all-out war.

• Morris is head of media at the SA Institute of Race Relations.

MICHAEL MORRIS: Sama slaps on a bandage while avoiding the wound

MICHAEL MORRIS: No idea is above scrutiny

An ambient morality is making society more tender, parochial and intolerant as touchiness creeps in across the ideological spectrum
Opinion
6 months ago